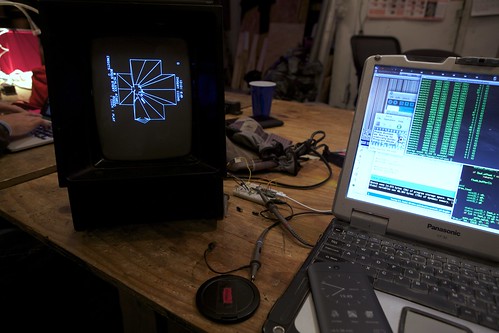 I've converted a Vectrex to an Vector display and am driving it with a Teensy 3 plus an SPI DAC. Using a modified version of MAME, I'm able to write the vectors to the Teensy over USB, which generates 12-bit lines using Bresenham's line algorithm and DMA to transfer the points to the DAC. This provides a nearly glitch free way to display the games and artwork.

The conversion involves disconnecting the Vectrex's CPU board and connecting the output from the DAC to the X and Y inputs, plus a third signal to the "Z" brightness control. This particular Vectrex isn't in very good shape -- the CRT board has wobbly caps and the solder mask has started to degrade.

The Teensy 3 does DMA to the SPI DAC, which generates 0-5V. A resistor voltage divider creates a 2.5V reference, which makes the voltage swing -2.5 to +2.5 volts. This is almost enough to cover the screen, although the final design will have opamps to scale and center each of the axes. The Z axis requires a +5V for On and 0V for off, so a 2N2222 transistor is used to to use one of the alternate SPI SS lines as a beam on/off switch.

The SPI clock is run at 25 MHz and each X or Y coordinate requires 16-bits of data. With the framing and setup bits, this allows roughly 1.25 million points per second to be generated.

MAME, with some patches, emulates the vector systems and writes the vectors to the serial port. This is working almost perfectly; I want to add an adapter for the Vectrex joystick so that the games are playable on the Vectrex as a console itself.

The Z axis wasn't working initially, which meant that the beam movements were visible. It is interesting to see how the different games behave -- Tempest (video) seems to always return to center, while Lunar Lander and Asteroids both move immediately to the next object to be drawn.

One major improvement (beyond fixing the Z axis) was adding a "dwell time" to the line drawing code. This repeats the first and last points of a vector a few times before moving on to the next one. You can see the improvement -- the font looks less "cursive" and more "arcade" by making the lines straight.

High-vector games are playable, but flickery. The need to slow down the beam means that the frame rate suffers and frequently the small text ends up a little ragged. Compared to the Tek 1720 vectorscope, the Vectrex has significantly lower bandwidth. 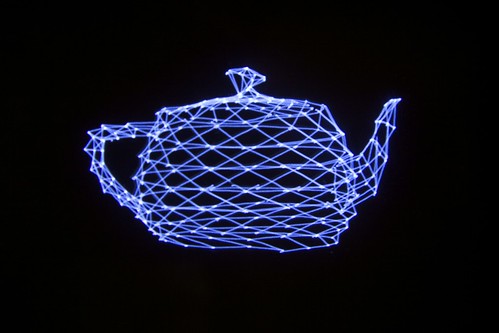 This is still a work in progress. Patches to MAME, schematics and source for the Teensy code is coming; rough version of it are in github/osresearch/vst/tree/master/teensyv. For more information on the drive boards, see v.st.