Hexscroller has been a central fixture at NYC Resistor for the past few years, with a few ups and downs. It's replacement, Octoscroller, improves on our classic message alert polygon by having two more sides and two more colors of LEDs. See it in action! and learn how to built it.

The userspace application renders images into a shared memory frame buffer, or in this case receives UDP packets containing video images from the Disorient Pyramid transmitter. The PWM algorithm can do between eight and sixteen levels of brightness for each color, producing approximately 12-bit color. 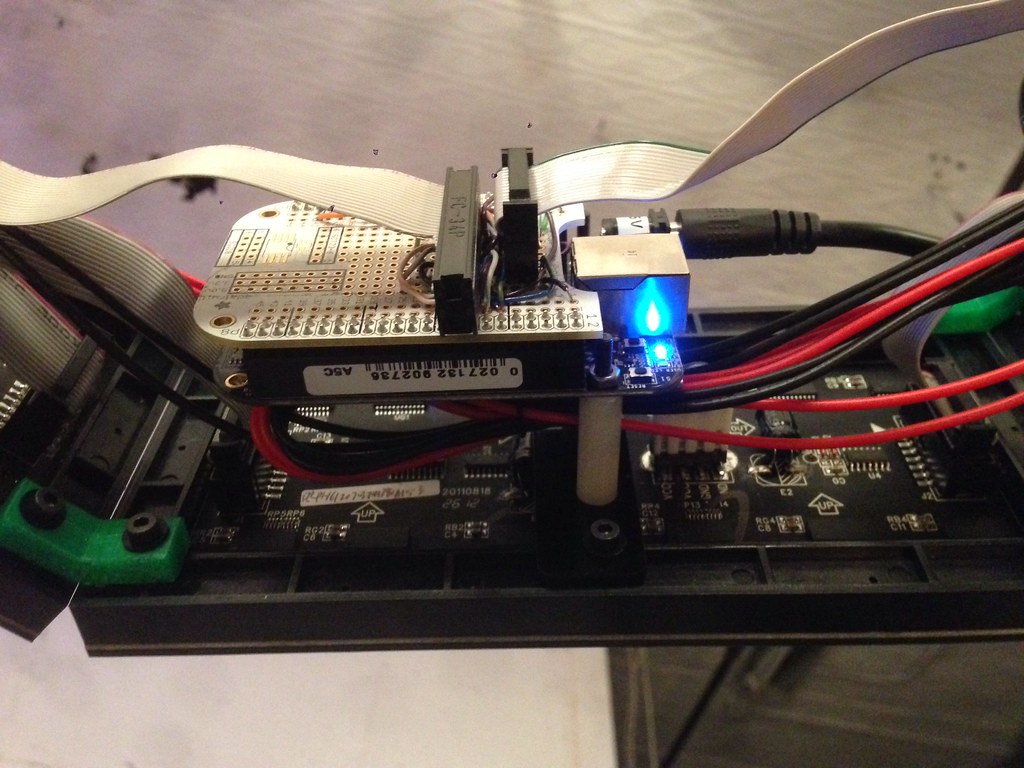 The brains are a BeagleBone Black running the LEDscape custom PRU firmware. The AM355 CPU in the BBB has two separate realtime microcontrollers built into its die, both with full access to the GPIO lines and cache coherent access to main memory. This bit of hardware/software allows the user application to simply render into a frame buffer, which is then driven to the panels by the PRU. The key component of Octoscroller are these 16x32 RGB LED panels from Adafruit or Sparkfun. Unlike the popular WS281x LED strips that have their own PWM hardware builtin to each pixel, these panels are very inexpensive since they require continuous refresh by an external driver. The Arduino firmware can only drive a single panel and consumes a significant amount of CPU interrupt time to maintain the image. With LEDscape, the BBB can drive up to four chains of four panels each at 0% CPU load. 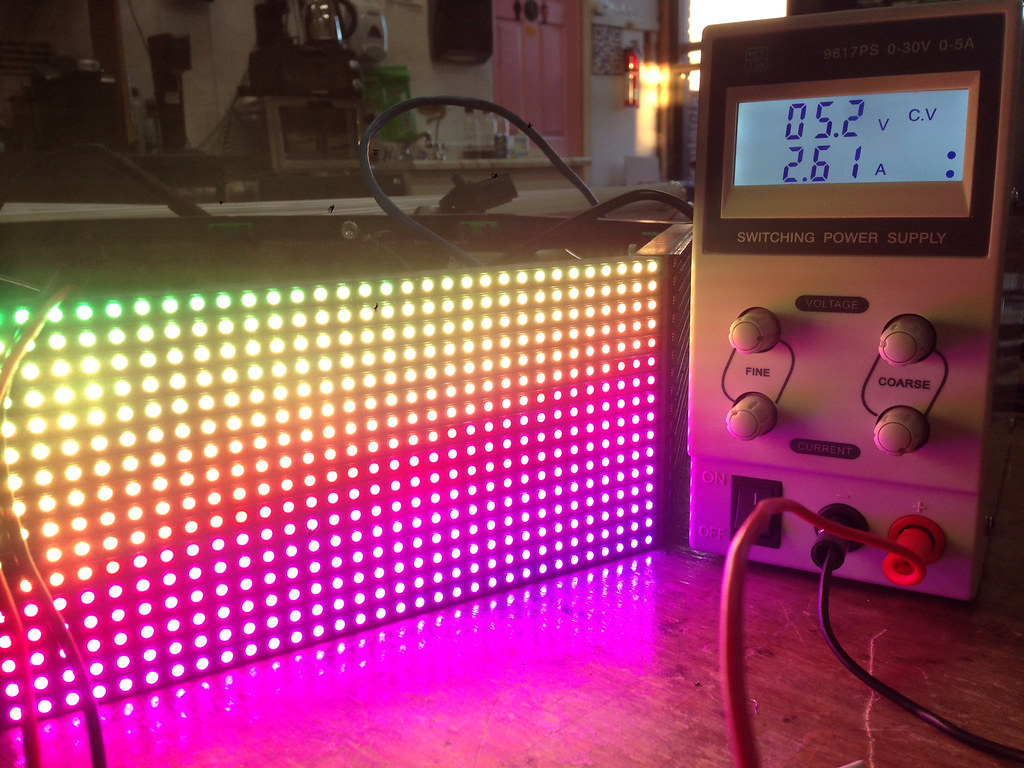 Powering the panels and the BeagleBone WAS a 5V 10A DC supply, but it turns out that each panel draws up to 2.6 amps in RGB mode and 3.5 amps while displaying full white. 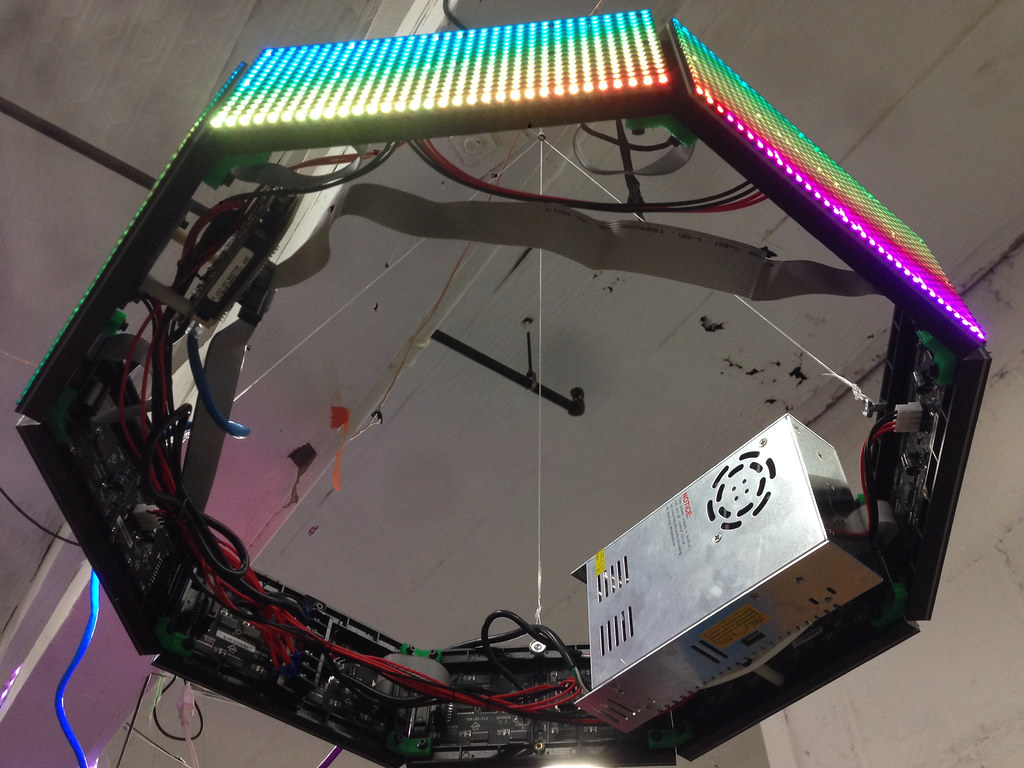 The ten amp supply melted during high-brightness testing and was replaced with a 60 amp open frame supply. This should be sufficient once octoscroller grows into hexadecascroller... 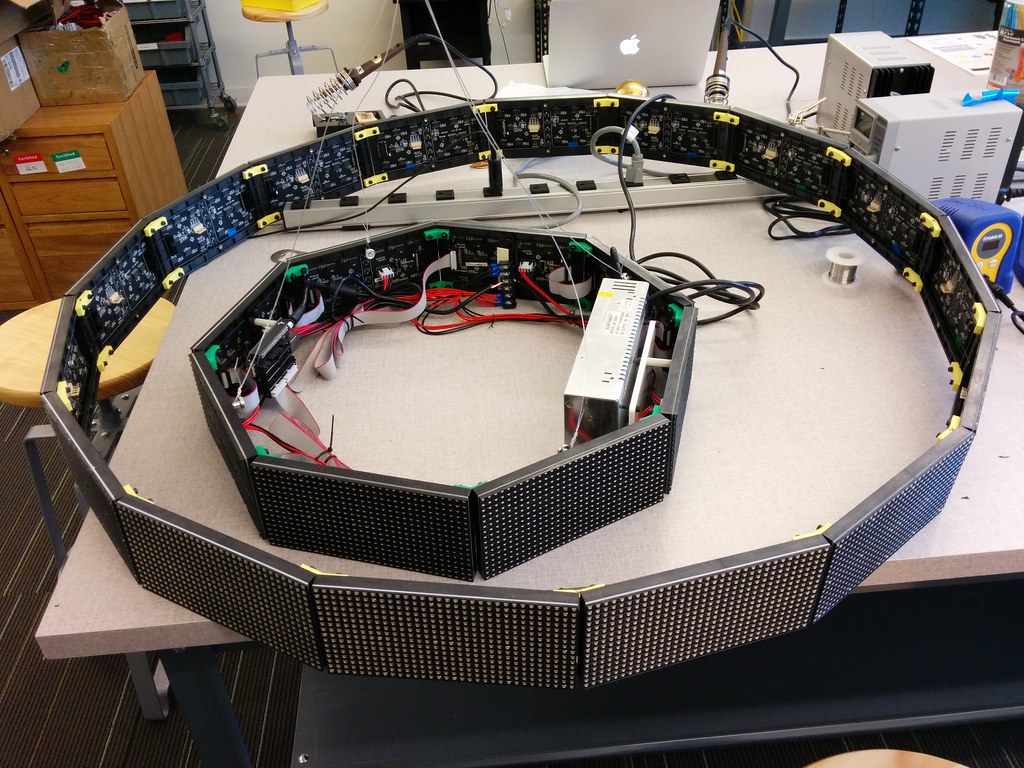 Speaking of hexadecascroller... The wiring might be too long and it is a little bit floppy. 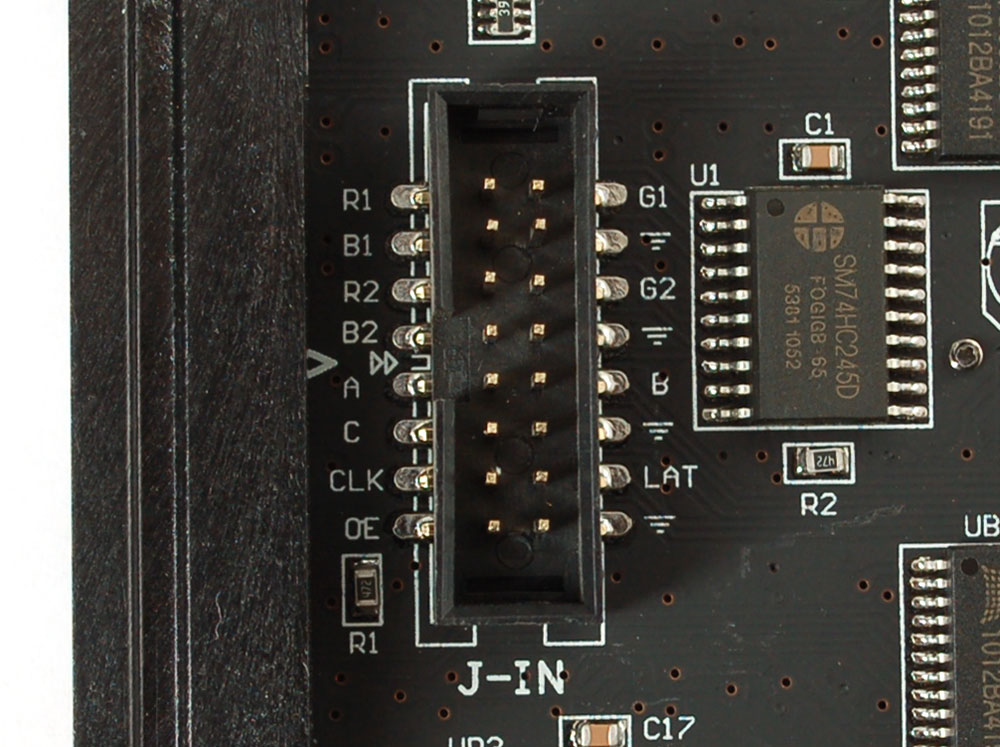 The panels are built as six parallel shift registers, each with 32 bits, and twelve 16-channel constant current LED drivers. The connectors have six data and six control inputs each: R1, G1, B1, R2, G2 and B2, and A, B, C, CLK, LTC, OE. The three address select lines, A, B, C, select which two rows are currently displayed (0/8, 1/9, 2/10, etc). On each falling edge of the CLK line, a new bit is shifted in on the six data inputs. On the falling edge of the LAT line, the new data is latched and, when OE is held low, displayed. To save on GPIO lines, the PRU shares the control lines between all output chains and only needs the six additional data lines per chain. If the HDMI hardware is disabled then four chains can be driven by the single board.

The panels also shift out the data to the left as they go, allowing them to be daisy chained. Since the entire row needs to be clocked out before it can be displayed, this limits the maximum desirable number of panels in the chain. The highest reliable bit clock seems to be on the order of 10 MHz, which means that each row of each panel takes about 5usec to output, or 40usec for all eight scan lines. If there are ten panels in series, this would rescan each panel every 400usec, which seems to be the limit of persistence of vision. (2.5KHz, 8:1 duty cycle.)

This section is out of date; the current version does binary width modulation

However, this duty cycle is only if the pixels are fully on or off. To create variable brightness using PWM requires that the panels be rescanned at a much higher frequency so that there can be more variation between the levels. In practice I've found that a maximum of four can be chained together and still retain decent performance (eight levels per pixel) or two panels with sixteen brightness levels. My current PWM algorithm uses the !OE line to toggle the display off after a few pixels on the next line have been clocked out. This seems to work fairly well, although I'm sure there are improvements that can be made. 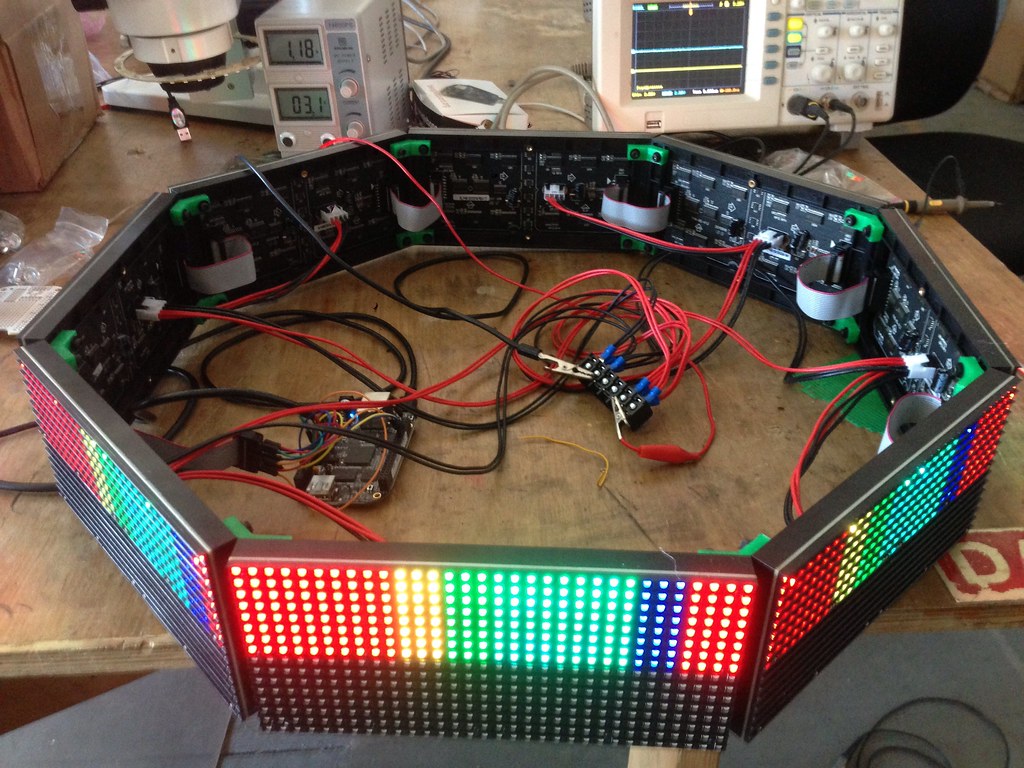 Want to build your own? We'll have a class on it sometime soon that will include all the parts and a custom BeagleBone cape to make your own network attached low-res colorful polygonal display device. 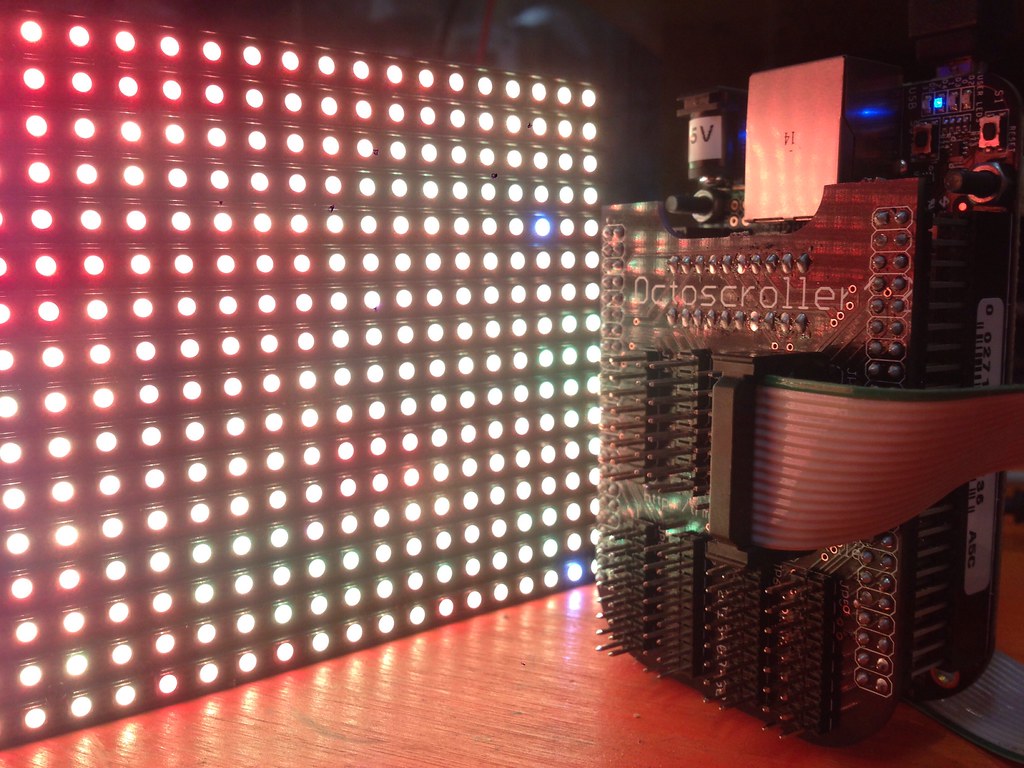 There are now circuit boards for driving up to eight chains of eight LED panels each. That's 64 LED matrices for a mini-jumbotron! If you're impatient, you can order the updated boards directly from OSHpark and LEDscape/Setup learn how to set it up.