There was an old AMD1026 one-line (90x7) LED sign hanging around NYCR that was not doing anything and required RS485 to interface with. I felt that it needed a more modern controller and an Internet interface, so I re-brained it with a SparkCore and put it online.

The new brains for the sign consist of a SparkCore on an Adafruit Perma-protoboard and bypass the original logic board almost entirely. The resistors driving the seven power transistor were desoldered and reconnected via jumpers to the 5V tolerant pins on the SparkCore (D0, D1, D3, D4, D5, D6 and D7). The P2 header between the old logic board and display board was cut and five jumpers soldered to the SparkCore.

The P2 header has six pins, the square pin #1 is ground:

The font was stored in an external EEPROM, although I've reused the one from the SolderTime clock. Thanks to @phooky for the ROM dump.

For each LED row there is a MJE210 PNP power transistor on the logic board (there are seven unpopulated ones, for the dual color display modules). For the new design these are driven by the 5V tolerant pins on the SparkCore through 150 Ohm resistors.

The display board has two sets of TPIC6B595 high power 8-bit shift registers, one for the even columns and one for the odd columns. They have their own falling edge triggered clock lines, but share the data line. There is also an enable pin and a latch pin. 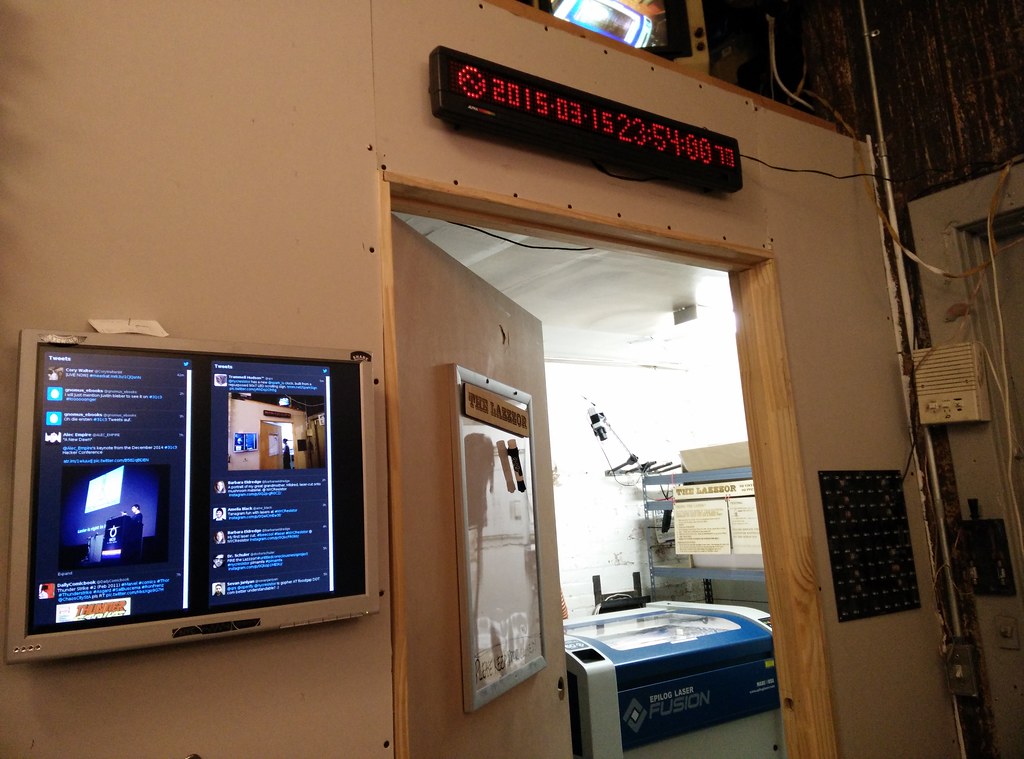 The sign now hangs above the laser room at NYC Resistor. Eventually it might be tied into a laser reservation system. Until then it displays the ISO UTC date and resyncs its clock once per day.

As another potential future project, I added pins for a Teensy 3 which can drive the pins much faster and since it doesn't have to periodically check the Intenet, it can do a few bits of PWM. This would work well for an art piece that doesn't need the network connection.

Source code is in github.com/osresearch/sparktime/tree/master/redscroller.