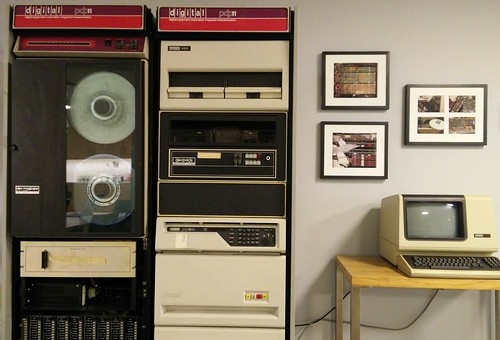 We rescued two PDP-11/34 computers and their associated equipment from a storage unit in the Bronx and have been working on getting one of them running again. It is now on static display at my office.

The PDP-11 uses a wire-wrapped Unibus backplane with many cards. The top four are the CPU, the next is 64 KB of memory, then a few "bus grant cards", the console controller, some others, and finally the disk controller. See "Options" below for more details. 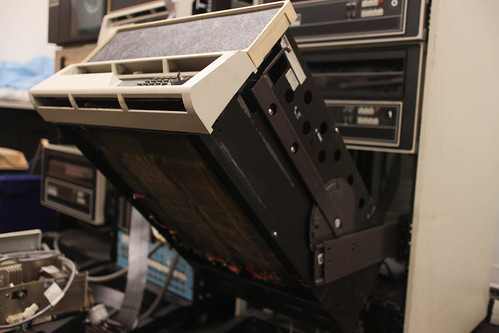 Adding or removing cards requires adjusting the wirewrap on the bottom of the backplane, so there rack slides are built to allow the CPU chassis to be positioned at 45 or 90 degrees for easy access. 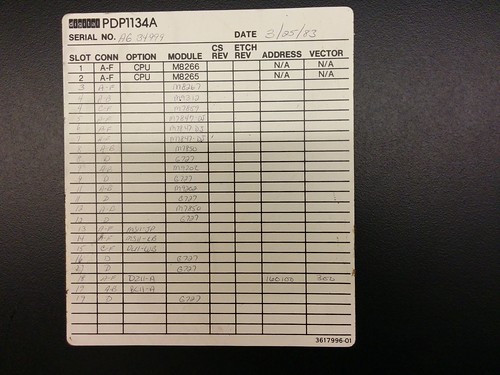 I have written a longer boot strap walkthrough.

The boot sequence had to be toggled in on the earlier models, but the /34 has an octal keypad so you can type the addresses and values rather than flipping binary switches. The sticker on one of the PDP-11/34 units has the startup code for booting from the RK05 drive; we've typed it in and single stepped through the instructions to verify that the CPU functions:

This is similar to the Bootstrap RK02/03/05 Disk Unit x sample code: 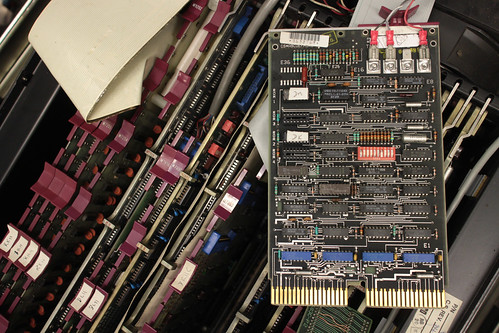 However, this machine has a M9312 "bootstrap / Unibus terminator" board, which has a several small bootroms for different devices like the RK05 decpack drive, RL02 harddrive or TU11 tape drive and also includes a serial console interface. This card allows the the machine to be booted with push button convenience using the VT100 terminals that we've restored. 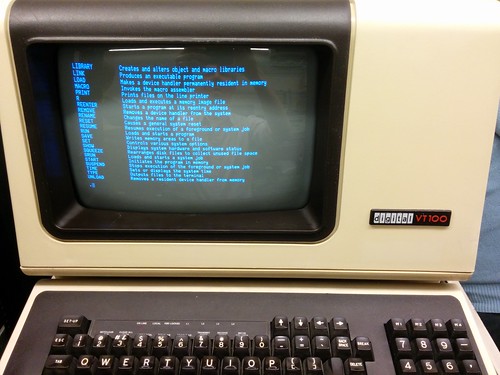 If you want to try running a simulated PDP-11, you can use simh to emulate it with these old operating systems. 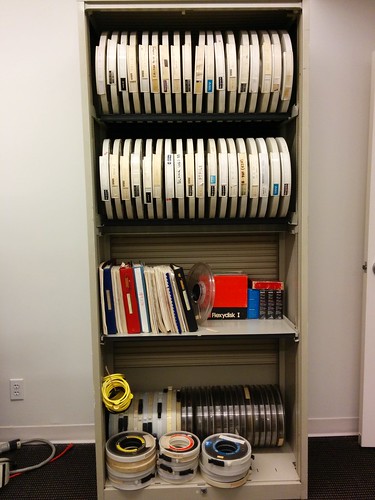 Also included racks of tapes, drive platers, floppies, etc. We haven't begun to sort through it all yet. One of the tapes does promise "digitized monkey brain", so I can't wait to get the tape drive working.

One of the RK05 drives had been powered down with a decpack platter still installed. We had to remove the cover to retract the heads and actuate the front door release. The head assembly includes this charming vernier scale.

We tried dumping the various platters from the system using the RT-11 COPY command:

and saving the output from a USB serial port adapter. This transfers fairly close to the 9600 baud "line rate" at 870 bytes/sec. Although this seems to not output NUL characters, so the files are not usable. Oh well. As quick hack, DUMP can be used instead:

This unfortunately sends 7 characters for every two byte word, as well as some additional overhead that means it is almost 4x as slow as the binary output. 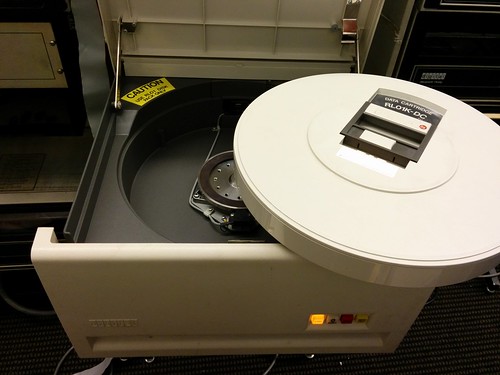 Both of the RL01 drives are in good shape and functional. One of them even has BASIC.SAV, so we can relive our youth. Due to the size of the drives (ten megabytes) we haven't tried to dump them yet.

There were a dozen various VT100 terminals of various vintages, although we haven't found many that work. Most of them seem to have bad CRT tubes, although the control board are functional. This one has an embedded CPU, possibly a PDP-11/110 of its own or a Z80.