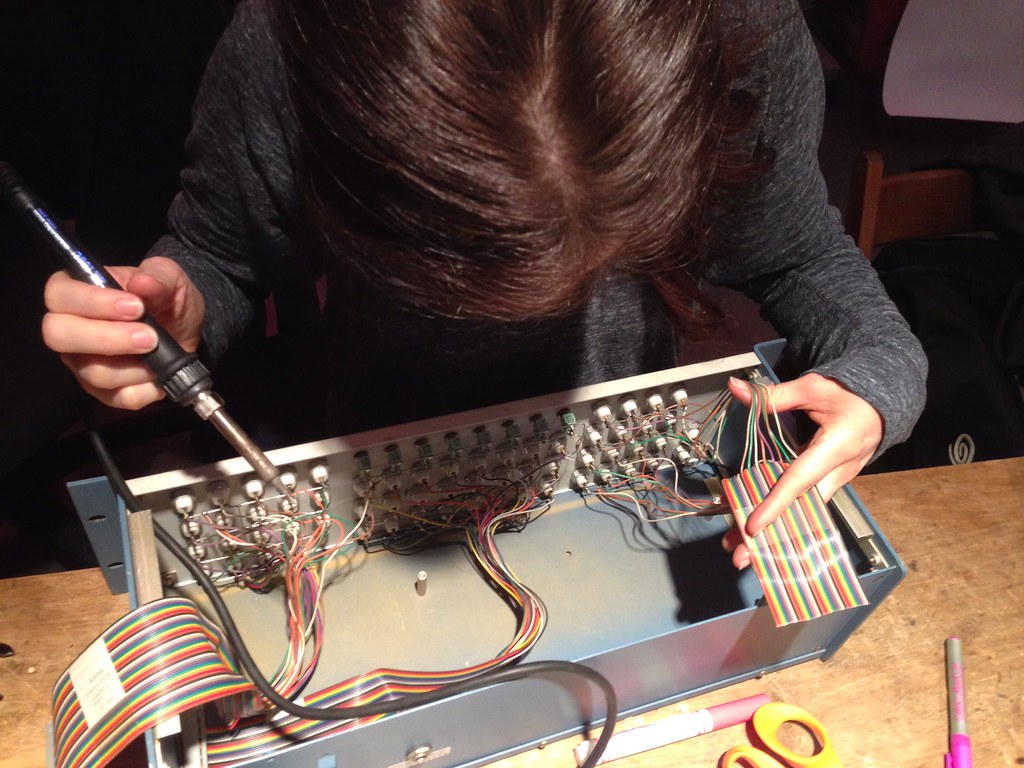 Do you enjoy playing Space Team, but find that you want tactile controls? Or like the Artemis Bridge Simulator, but think it is too serious? Do you love pushing buttons, turning knobs and shouting at each other? Then you missed your chance to have fun playing Future Crew at the NYCR Interactive Party! 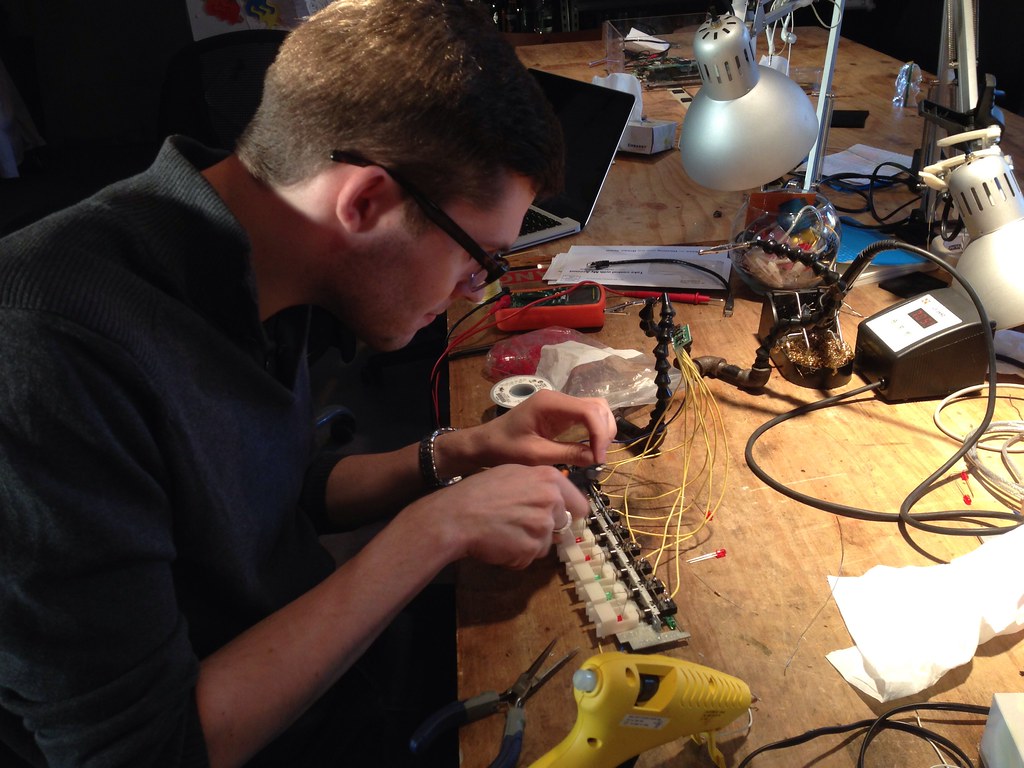 Since the theme of the party is "Digital Archeology", all of the control stations are being built from repurposed dead hardware. There's a patch panel, push buttons, strobe lights, more push buttons, quadrature knobs, oscilloscopes, and maybe even a teletype to keep score. 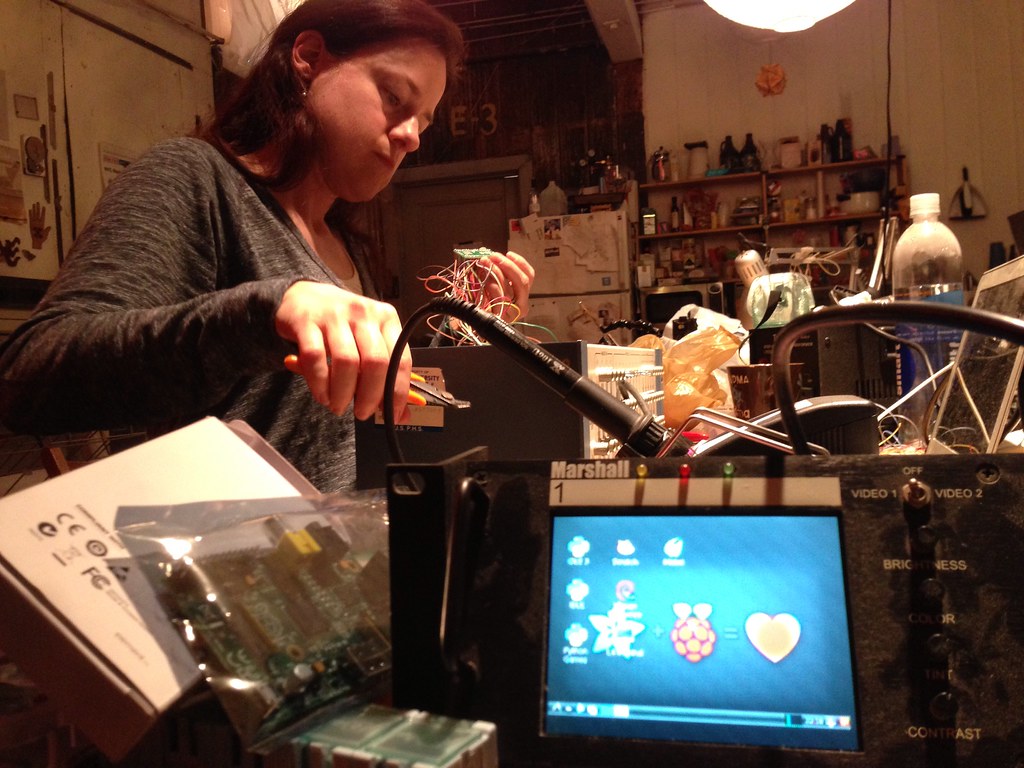 Each console will have a Raspberry Pi with Wifi to talk to the other consoles, some number of Teensys to talk to the real world, and some sort of glitchy way to communicate to the operator (like an NTSC TV or a Minitel). If things don't work right, that's part of the fun. And, of course the source code will be available for you to build your own Future Crew Consoles.

Game play video. At the 2013 Interactive Show we finally unveiled the fully mostly operational game stations. There were five stations in the final design, and in keeping with the show's "Digital Archaeology" theme, each was built from repurposed ancient hardware. The brains of each console was a Raspberry Pi (to connect to the network and draw OpenGL graphics) and some number of Teensy microcontrollers to interface with the real world. Of course, the source is available for you to build your own Future Crew stations! 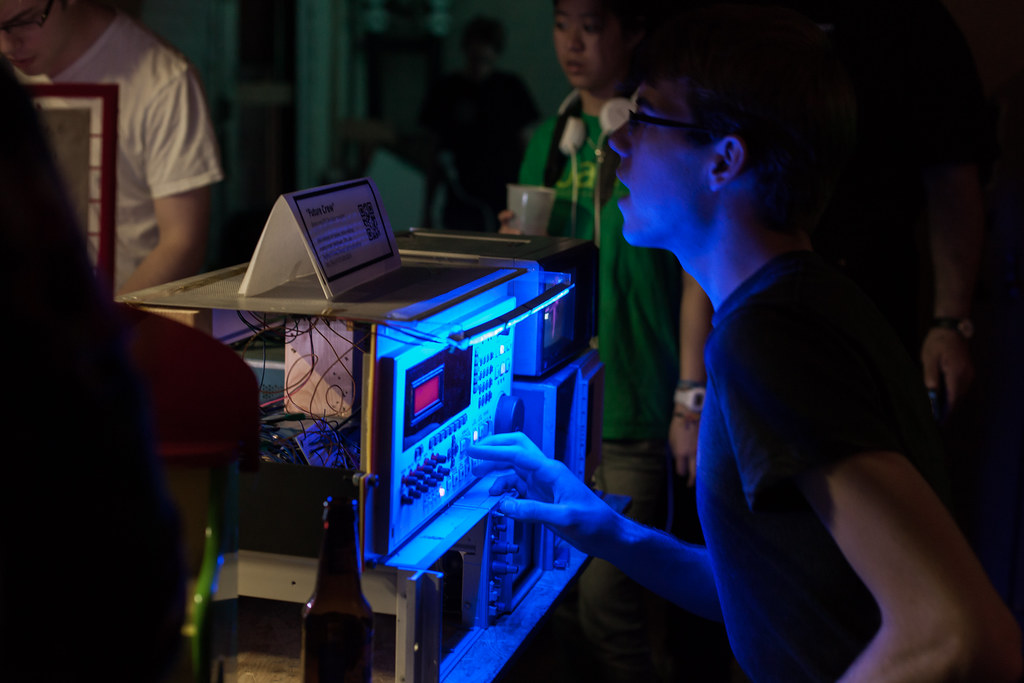 A discarded video edit console and RF TV became the Timeline controller. Since the Pi can turn the composite video on-and-off, one of the modes glitches out the TV occasionally with real static! This one had some of the more imaginative tasks like "disable all blinking buttons" in addition to the normal tasks like "advance the timeline!". 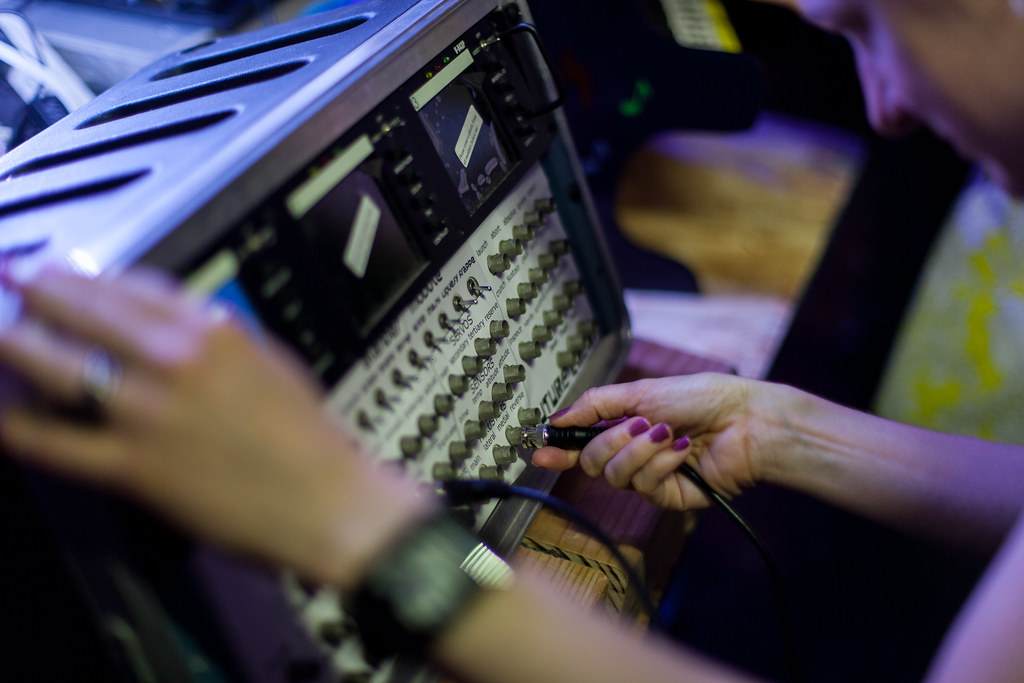 A rackmount data acquisition analog-digital converter and three NTSC TVs became the Blender control unit and Technobabble patch panel. The labels were printed on our large format plotter and then the BNC holes were cut on the laser cutter. The teensy++ firmware can handle arbitrary cross connects and even multi-way connections. This was one of the harder stations to play -- there are eight switches, twenty verbs and twenty nouns. We ended up disabling all the verbs except "MODULATE" since it was much too difficult to find the right ones. As a todo item we plan to ramp up the difficulty as the game goes on. 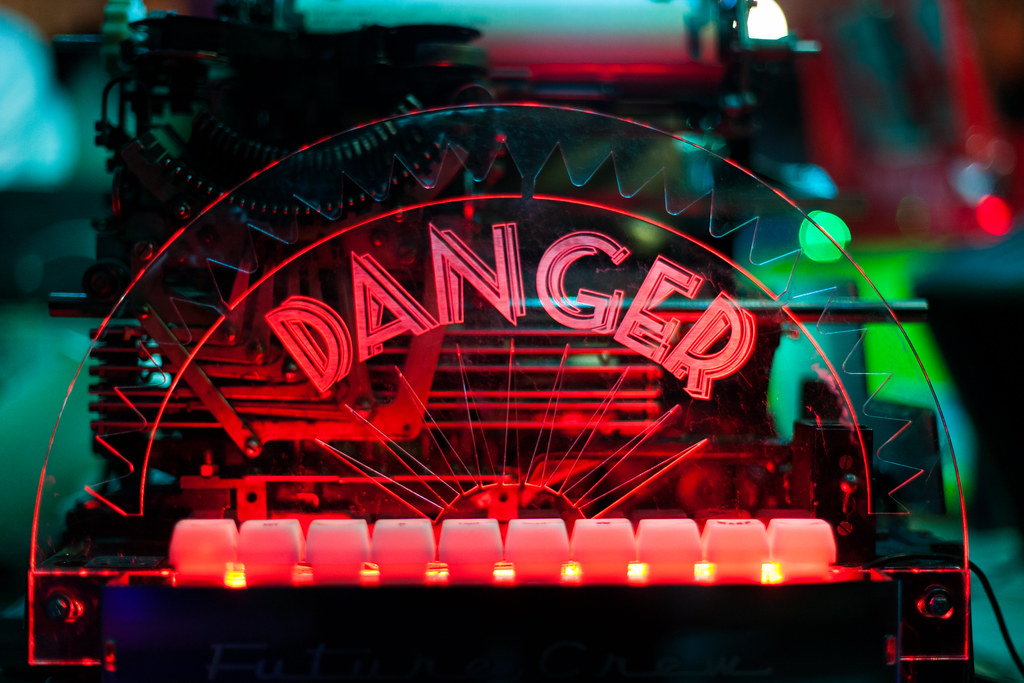 A 1930's Model 15 Teletype and some random video switcher served as the slowest output console. It's amazing that the teletype functioned nearly perfectly for the entire eight hour show -- perhaps the fresh quart of oil during the previous servicing helped keep it working. The source for this console is one of the simpler ones -- it just prints to a file descriptor to write to the teletype. 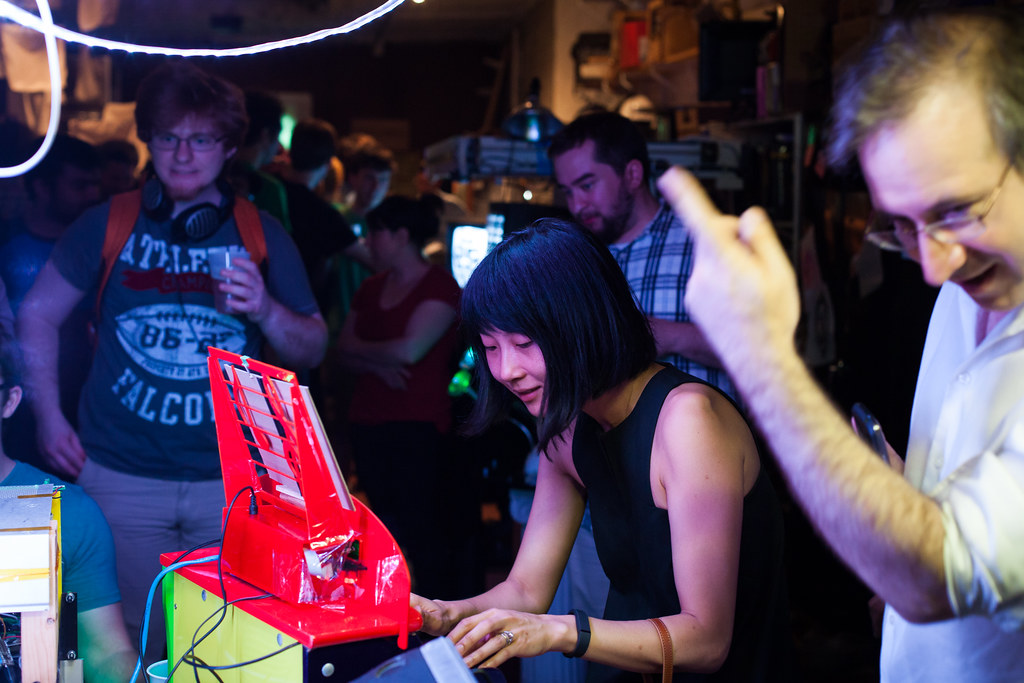 One of the hardest consoles was made from a toy piano. Even with the song book, playing "Row Row Row Your Boat" under duress is not easy. 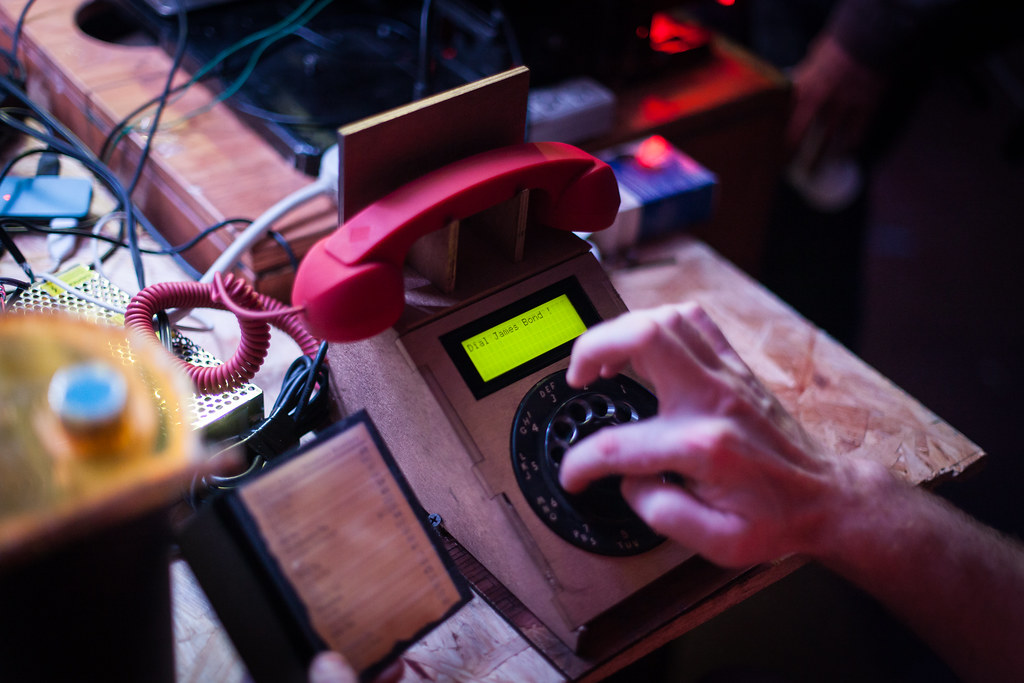 And a last minute entry was a rotary phone. Quick! Get the President on the line! This time the handset just had a recorded loop, but future games will incorporate text to speech.

We had a whole list of things to fix and improvements to make before Makerfaire 2013.