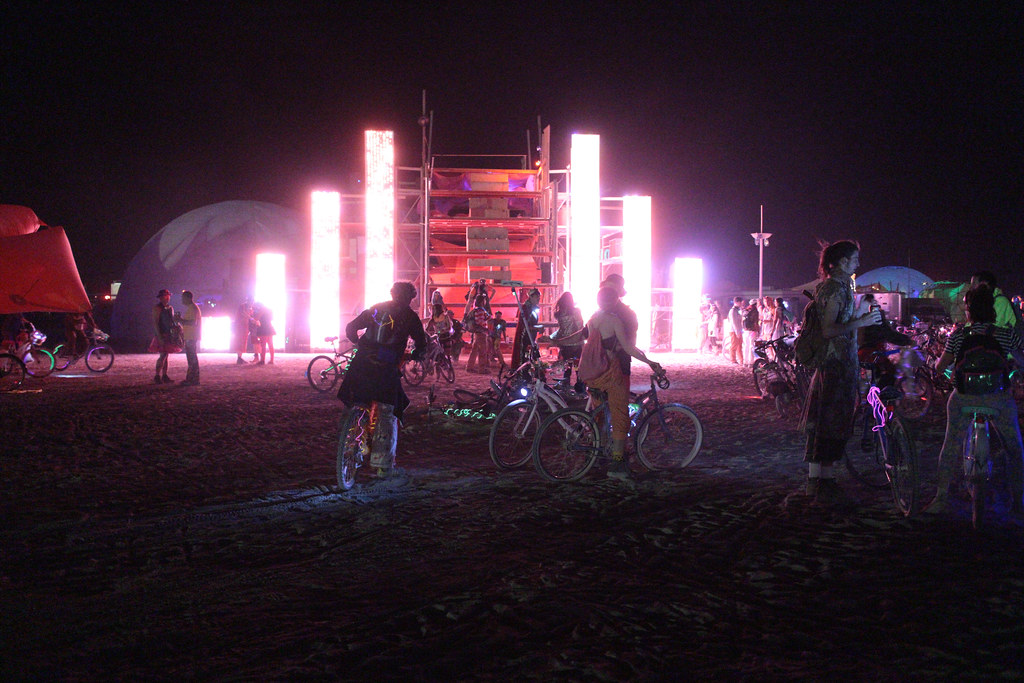 In 2013 the Disorient Camp at Burning Man built a 7m tall pyramid with over half a kilometer of LED strips. Several artists developed patterns for the panels, including Disorient founder Leo Villareal and Jacob Joaquin from Fresno Idea Works.

Every night there was a party in front of the pyramid, with bicycles blocking the entire Esplanade. The pyramid was visible from just about everywhere on the playa and served as a great beacon for finding the camp after a long night out. 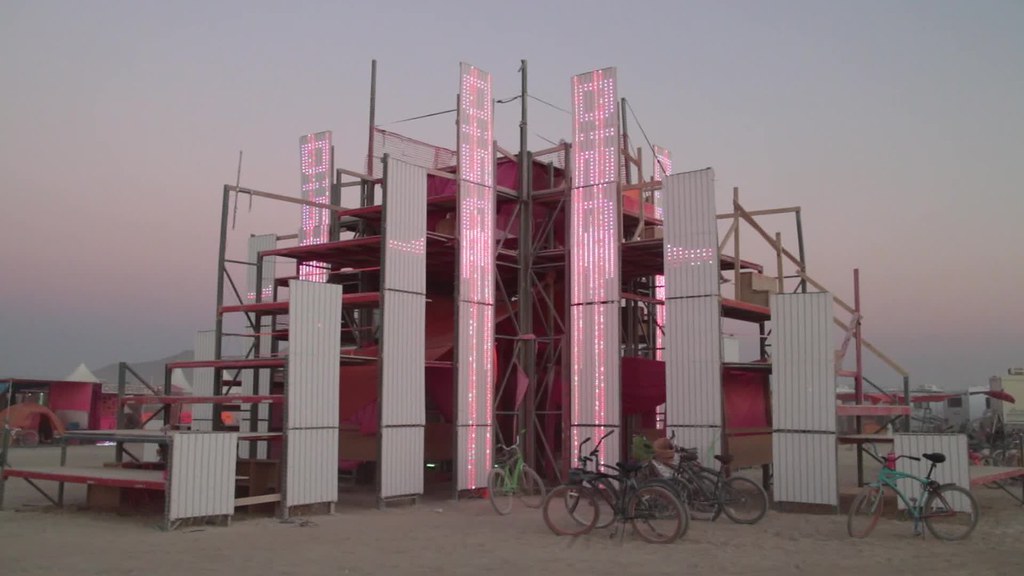 Click the image to watch a video of some of the patterns playing on the Pyramid. 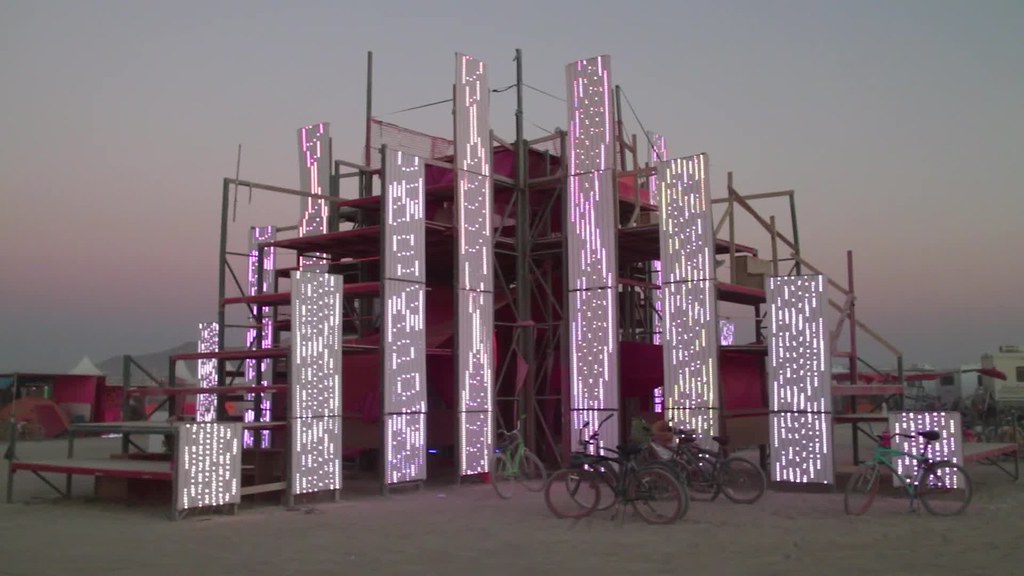 One of the longer patterns shows an evolution from the double helix of DNA, to the game of life to worms wiggly snakes before transitioning back to more abstract patterns. Click to watch it play. 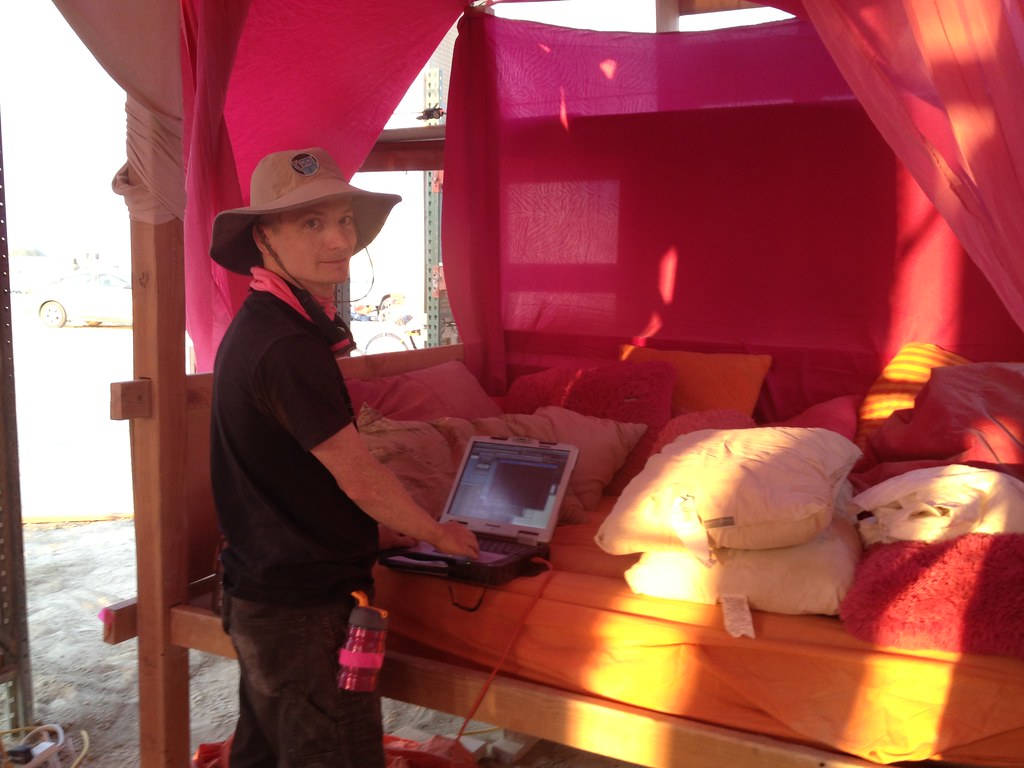 A Toughbook ran all of the pyramidTransmitter code, which rendered the frames to 24-bit bitmaps and sent them over UDP to the network. This machine spent all night in the dust and each morning was covered in several milimeters of fresh playa dust. 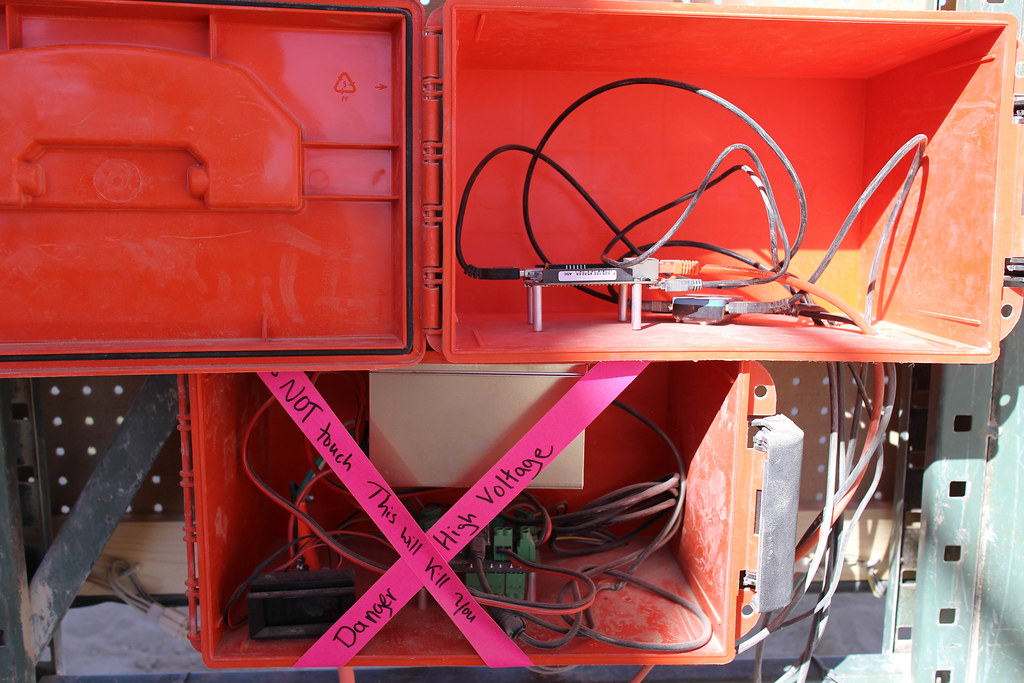 Driving each face of the pyramid was a BeagleBone Black running LEDscape, which sliced the images into the individual panels. It then sent the individual pieces over USB to four teensy3 microcontrollers, each which had eight WS281x 30 LED/m strips. The tall panels had 5V 40A supplies, the smaller ones used 30A.

The project was a bi-coastal one -- the large panels were soldered and wired in California and much of the low level software was developed in New York. The boards were designed by Naim and available under an OSHW license. On site a crew of volunteers assembled the panels onto the pyramid structure built by the rest of the Disorient camp.

Operating in the harsh conditions of the Black Rock desert is difficult for electronics. We had lots of trouble with the powersupplies failing due to the heat and dust; next year perhaps we'll use more, but lower amperage, sealed DC supplies. The adhesive holding many strips to the pegboard failed. Several of the solder joints broke due to stress during mounting. Screw terminals rattled loose from the 25KW of sound system in the Disorient dome. There was late night soldering while hanging from the rafters of the pyramid. Despite all these problems, the panels and the sixteen thousand LEDs put on quite a show the entire week.

A Mini Pyramid was also built for demos. Check it out!