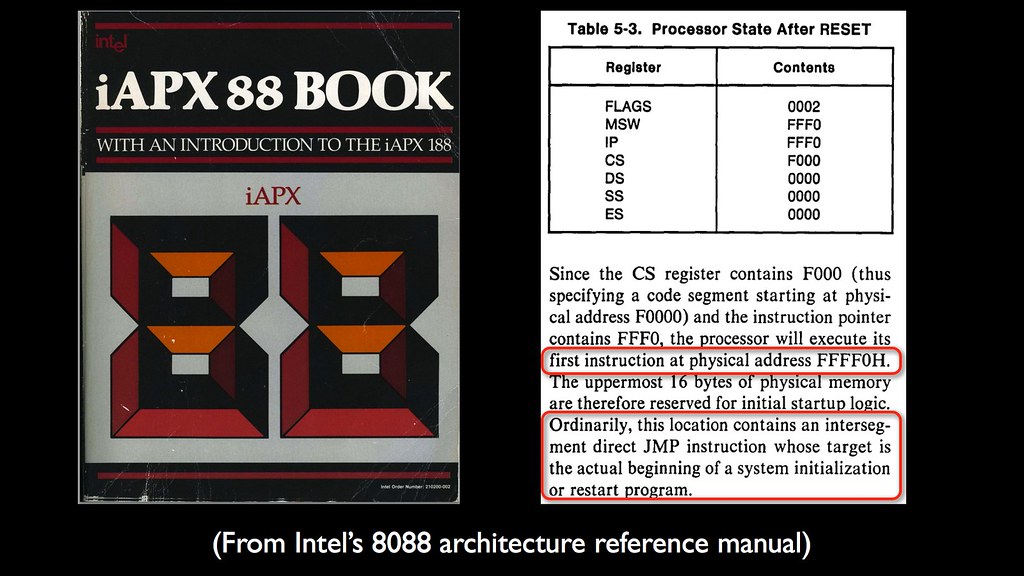 This page attempts to document what I've found about the modern era of CPU bootstrap and how we can use it to make slightly more secure systems. Most discussion of the boot process assume that the CPUs startup exactly the same as they were in the 1970s, which is only sort of true.

The legacy reset vector at 0xF:FFF0 is no longer the first instruction the x86 CPU executes. Instead the Intel Management Engine (ME) arranges for the CPU microcode to validate and execute an "Authenticated Code Module" (ACM) from the Firmware Interface Table (FIT). Once all of the ACMs in the FIT have run, the legacy reset vector is invoked and the system startup proceeds like its 1979.

When the OEM receives the CPU, the ME is still in "Manufacturing Mode" and runs a special part of the firmware that will copy the "OEM Public Key Hash" and "Boot Guard Profile Configuration" policy values from its section of the flash ROM into the CPU field programable fuses (FPF) so that they are permanent and unchangable. It then sets a fuse to indicate that it has exited from manufacturing mode so that this portion of the firmware will not run again.

The "OEM Public Key Hash" is a SHA-256 hash of the public key that is used to verify the signature on the Bootguard Key Manifest, which has the public keys used to sign the "BIOS-SM" ACM and other flash files. The Boot Guard FPF has four policy settings:

Based on what I've heard, but not seen documented, the verification of the OEM public key hash and the OEM signature on the FIT is done by the CPU microcode before it comes out of reset. I need to find this documented somewhere.

The FIT structure is defined in edk2's FirmwareInterfaceTable.h and the FIT pointer is usually at 0xFFFFFFC0 in the ROM. Verifying that it points to the table is easy since it starts with the header '_FIT_&nbsp;&nbsp;'. It contains entries for the microcode updates, boot policys, TXT policy and other things. The one that we are most concerned with is the STARTUP_ACM.

This table decodes (note that the length fields are in counts of 16-bytes each):

More information on the Intel Microcode update format is available, although we're treating it as a black box. As long as it is measured, we don't care too much for now.

The ACM format is defined in the Intel TXT Software Development Guide (section A.1). The Startup ACM doesn't have a length in the FIT table,be encoded in the entry itself at offset 0x18. The entry point offset into the ACM is at offset 0x34. and there appears to be a 512-byte public key at offset 0x80 with an exponent of 17 (0x11) and a 512-byte signature. This does not appear to match the hash in the boot guard profile, but the same 512-byte key appears in the Boot Policy in the FIT (at offset 0x2080).

This code appears to run in 32-bit mode with references to a stack. The ME might enable "cache-as-RAM" mode, which allows the CPU to use the cache in non-writeback mode as if it were RAM, long before the memory controllers have been brought online. It also appears to use very low-value memory addresses for its data segment, possibly indicating that it is relocated to 0x0 in RAM, although the GDT referenced in the header might allow this to be relocated elsewhere. The specification says that "since the authenticated code module must be relocatable, all address references must be relative to the authenticated code module base address in EBX."

In the one that I've analyzed there are SHA1 and SHA256 implementations (easily spotted due to their constants 0x67452301 and 0x06a09e667), and it appears to talk directly to the TPM at address 0xfed40000 and interacts with the TXT private configuration registers at 0xfed20000.

One of the routines reads from 0xfed20328, which I believe is the ACM STATUS REGISTER mentioned (but not documented) in of the Intel TXT Software Dev Guide (footnote on page 80 mentions a (non-public?) document):

When it is done I believe it calls GETSEC[EXITAC](EXITAC) (%eax=3), which will shutdown the ACM and jump to a near pointer to resume normal startup. There is a lengthy function that finds this address 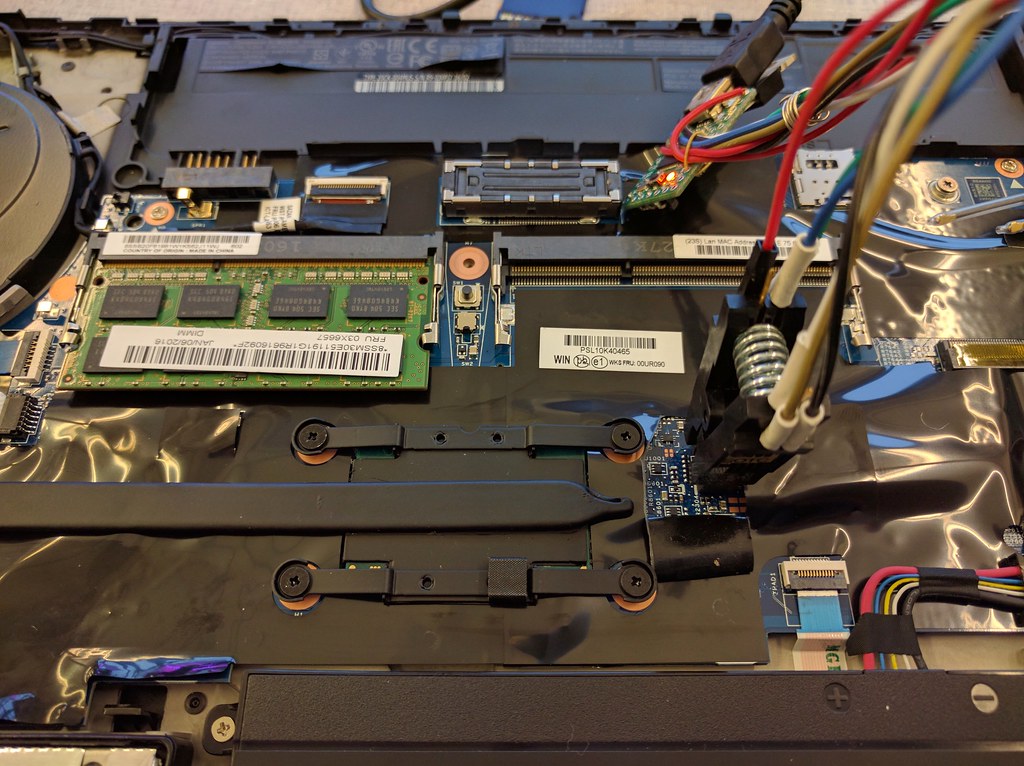 The "BIOS Startup Module" appears to be a normal UEFI FVH structure. There is probably a signature on the end, I haven't yet checked but the FITC tool says that this is supposed to be signed. This module is around 1.2MB and includes the usual list of PEI, S3 and SMM modules. It also includes the TPM driver, as well as graphics, USB, etc.

The one that I've examined (t550) starts at 0xFFED0000 and covers all the way to the top of 4GB, which includes the legacy reset vector at 0xF:FFF0. It is not clear to me where it is signed nor where the signature is checked, although it is definitely hashed and measured by the Startup ACM prior to being invoked.

The BIOS ACM has a public key that matches the startup ACM and what appears to be a signature, but it does not cover the entire module. It appears to only cover the 0x18c80 bytes starting at 0xFFFE0000, which does not include the legacy reset vector.

However, modifying the legacy reset vector prevents the system from starting, so it is included in a signature or hash somewhere that has yet to be determined.

It is possible to see if Bootguard is enabled by reading the MSR:

A value of 0 indicates that it is not provisioned. The other values come from intelmetool in coreboot:

As soon as power is available, the ME boots up from its on-die boot ROM, checks some straps and fuses to determine its configuration, and typically then copies the flash partition table from the ME region of the flash to its on-die SRAM (although ROMB fused chips have limited security). The boot ROM locates the FTPR partition and copies it from the SPI flash into the on-die SRAM. It then checks that the SHA-1 hash of the key stored in the parition manifest matches the one in its on-die ROM and validates the RSA signature on the rest of the partition manifest. The partition table contains hashes of each of the modules in the partition, allowing the modules to be validated after they are copied into the on-die SRAM for execution (Intel ME Flash File System Explained - Sklyarov et al, BH-EU 2017).

When the ME boots the x86 CPU, the on-die microcode fetches the FIT pointer at 0xFFFFFFC0, which points to the FIT table somewhere in the SPI flash image. This table is then searched for microcode updates that match the CPU ID. The current microcode copies them from flash in a linear fashion (into L3 cache?) and decrypts with an on-die symmetric AES key (Chen & Ahn 2014), then validates with (on-die?) RSA key. It's likely that these ucode updates also contain the key hashes for the ACM.

Next the x86 ucode goes back to the FIT to find the Startup ACM and does an odd copy of it into L3 (looks like multiple hyperthreads are copying 4KB chunks?). The ACM contains an RSA public key; the ucode compares it against either an on-die key (hash?) or one stored in the ucode update and halts the CPU if it does not match. The ucode then checks the signature on the ACM and again halts if it does not match.

The Startup ACM is supposed to run entirely out of L3, although there have been bugs ([[TOCTOU|Bosch & Hudson, 2019]) that allowed a proximate attacker to use devices like the Spispy to detect accidental cache misses and TOCTOU the firmware. The ACM receives the OEM public key hash and Bootguard Profile from the ME via MSR. (Can't remember the order of operations here),

The ACM reads the BootGuard Key Manifest from the SPI flash (pointed to by the FIT and identified by __KEYM__) into L3 and hashes the RSA public key stored in it. If it doesn't match the OEM public key hash or if the OEM public key signature on the Key Manifest or if the stored KmSvn isn't right, the ACM takes action based on the Bootguard Profile bits. If it does match, it locates the Bootguard Policy in the FIT (and identified by __ACBP__) and copies it into L3. The ACM then computes the hash of the RSA public key in the Policy and compares it to the SHA256 hash stored in the Key Manifest. If that fails to match, or if the RSA signature on the Policy doesn't match, then the ACM again takes action based on the Profile settings.

The ACM uses the now validated Bootguard Policy structure to read the Initial Boot Block (IBB) segments into L3, hashing them as they are copied (and hopefully not causing any cache misses). If this computed hash doesn't match the "IBB Digest" in the Policy, the ACM takes action based on the Profile settings.