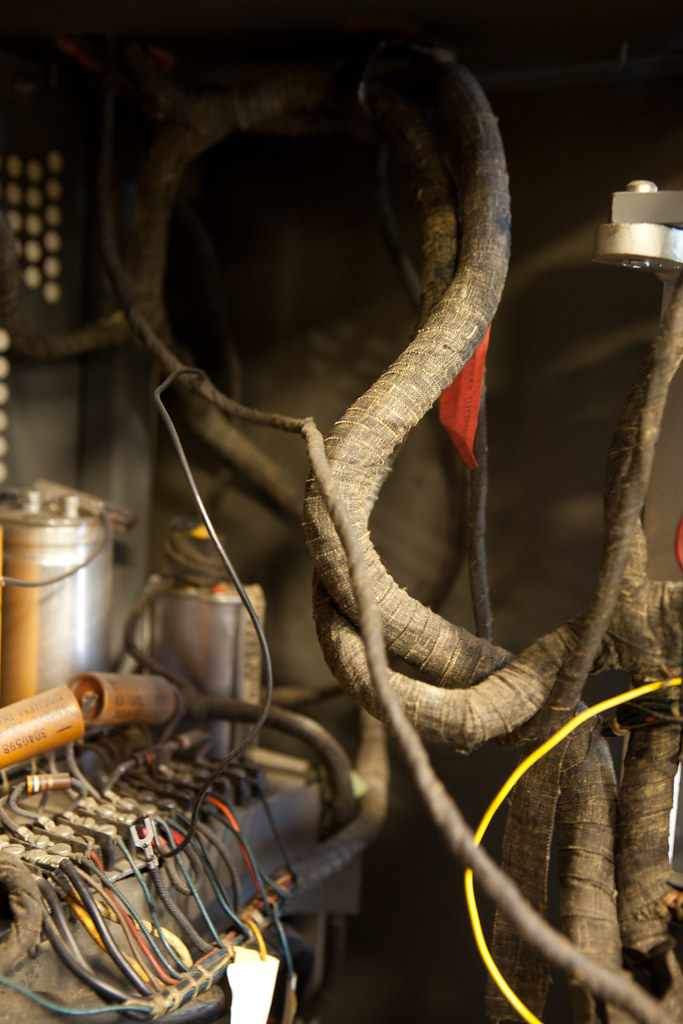 This is neither a tree root nor an eldritch horror -- it is a thirty year old wiring harness from a punch card sorter. If you enjoyed our IBM 129 Card data recorder restoration or are a fan of vacuum tube era design and mechanical engineering, you might also be interested to see what we found inside an IBM 83 card sorter. 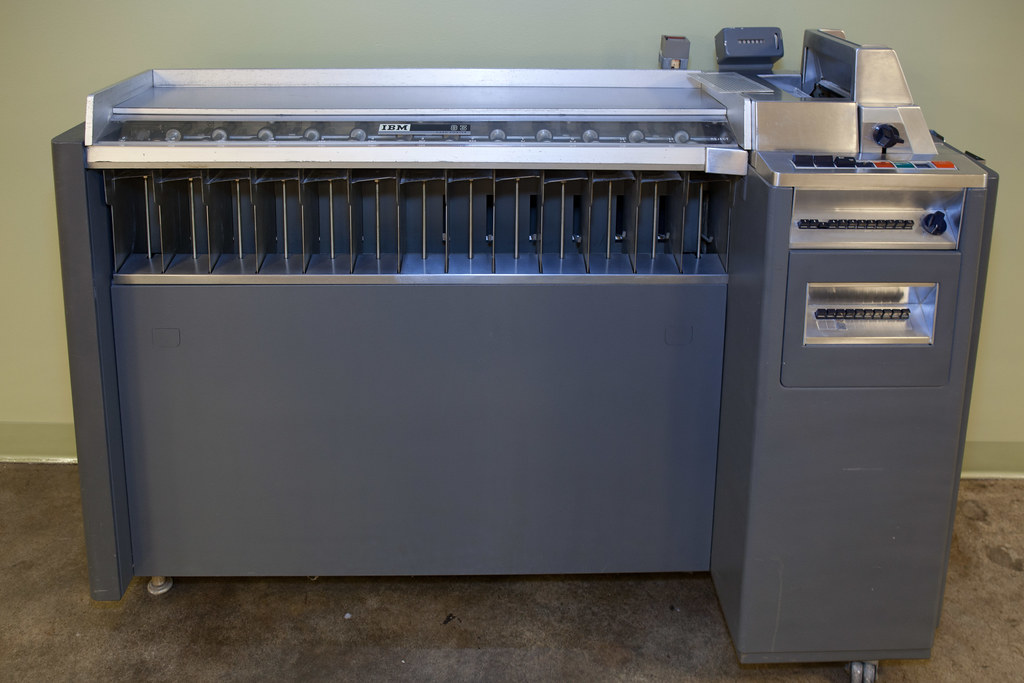 The machine is imposingly large, in a way that modern input devices are not. It is full of welded steel frames and probably weighs over 200 kg. 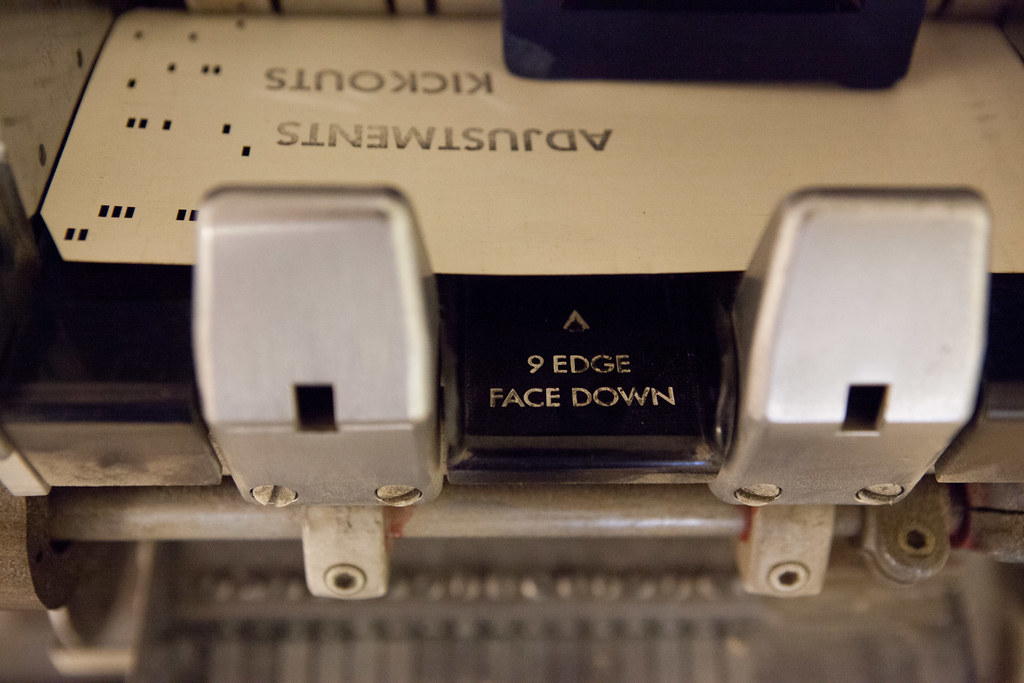 The cards are placed into the hopper "face down, nine edge first" (which, incidentally, is how old IBM engineers want to be buried when they ABEND). 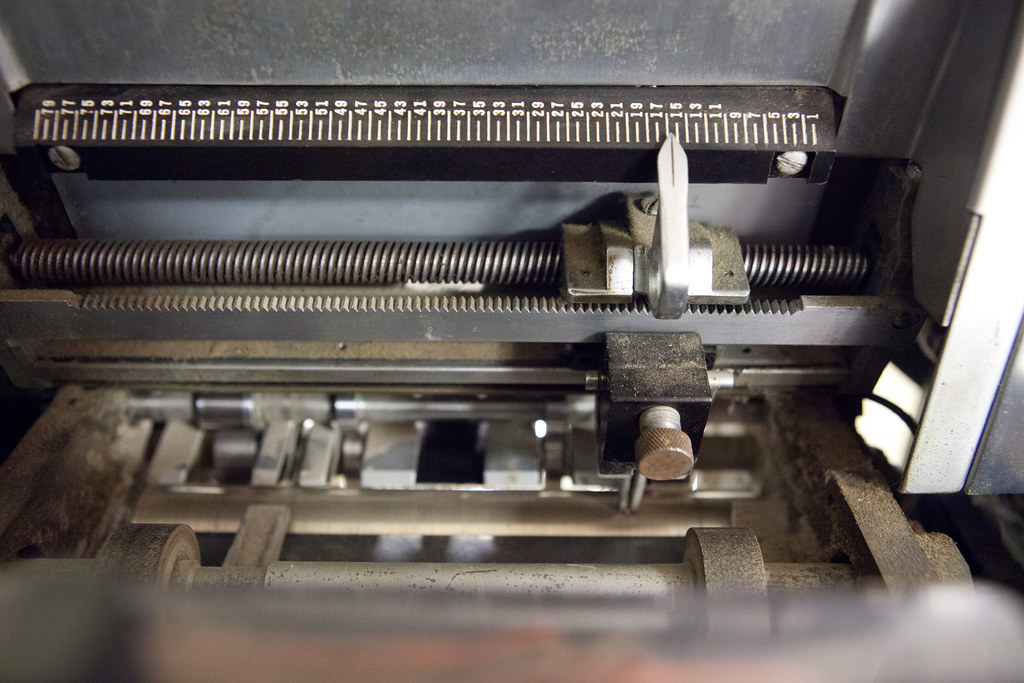 Since the machine is able to read only one column per sorting operation, the operator must manually select which column will be read by turning the lead screw. Here the reader is set to sort on column 16. 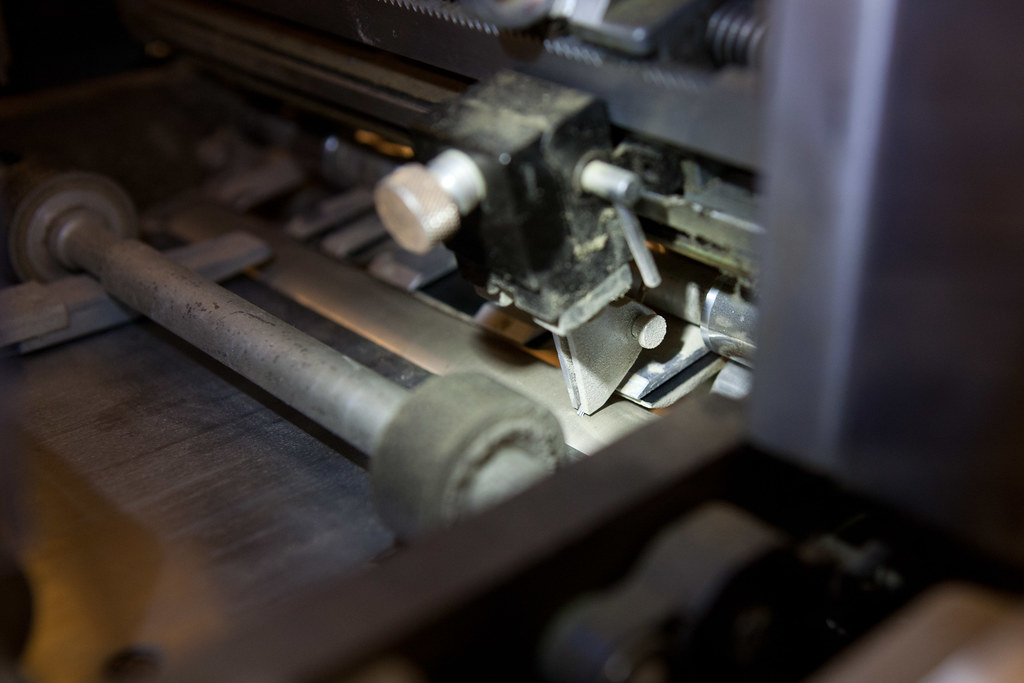 The read head is mechanically very simple -- a wire brush that electrically contacts the rotating drum when a punched hole passes by in that column. The encoding is not dense like ASCII or even EBCDIC, but only allows a single bit to be set in the 1-9 position for A-Z. Bits 12, 11 and 0 are used for selecting A-I, J-R, S-Z. 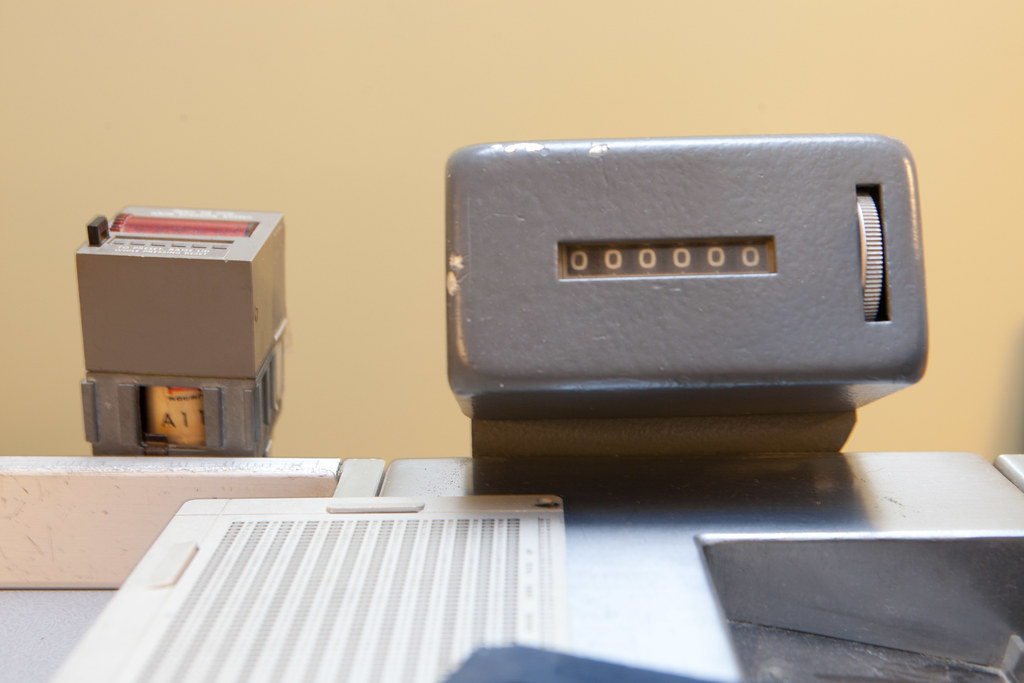 A mechanical counter advances if the card is valid. There is also a non-standard second counter unit; more about that later. 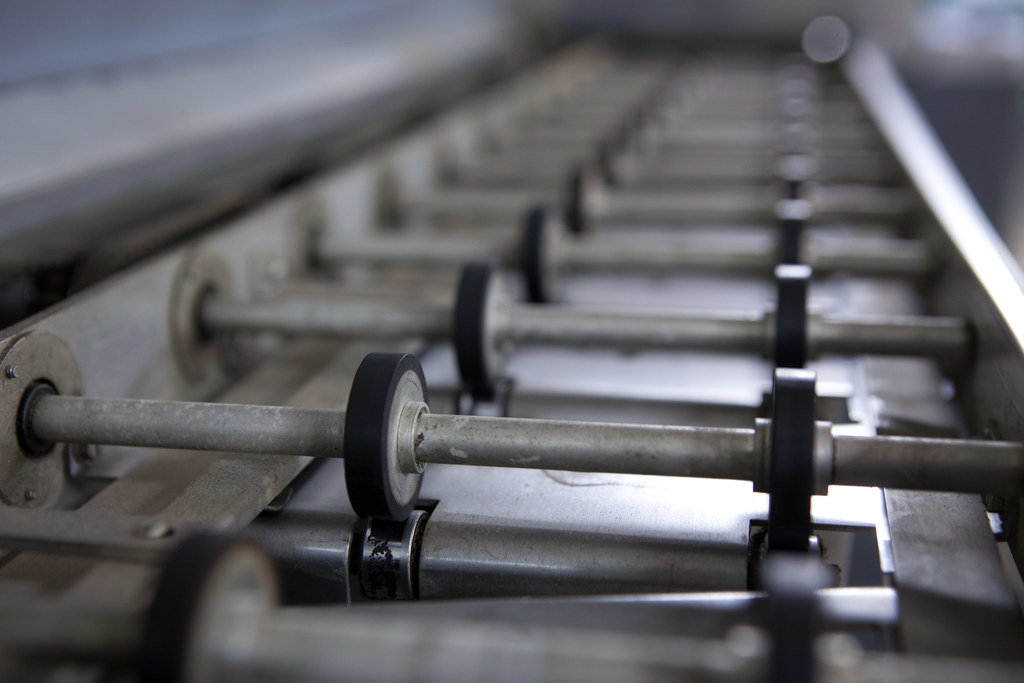 The card is then moved by these rollers until it reaches the desired one of the thirteen hoppers. The twelve "chute blades" select which output path the card will take, based solely on which bit is set in the currently selected column. 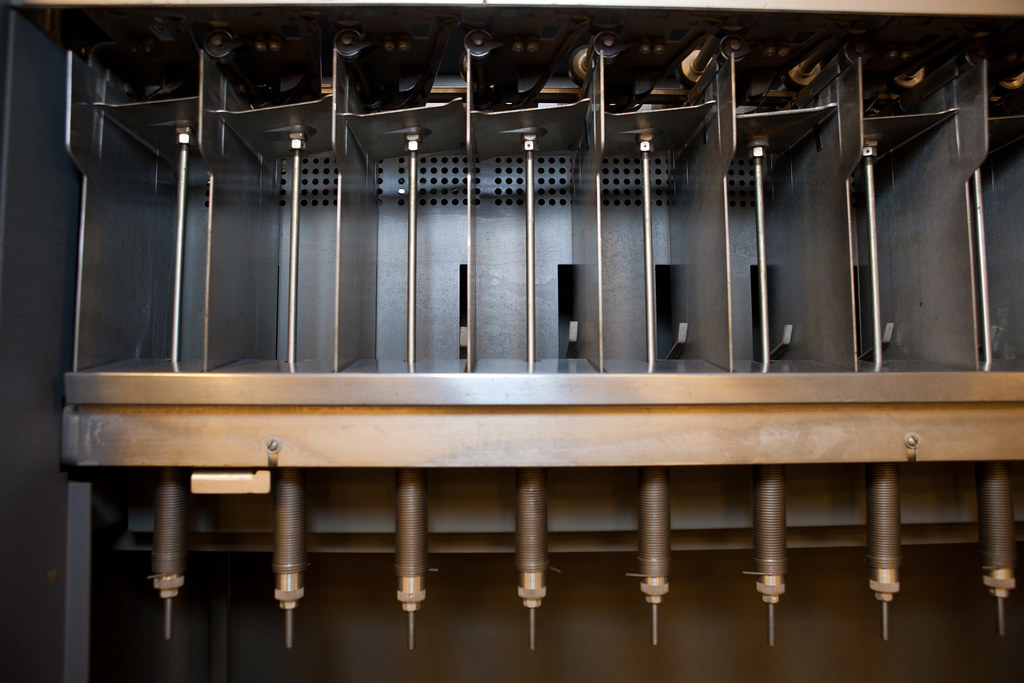 Eventually the cards end up in a hopper. The spring loaded supports will trigger a machine halt if any of the bins becomes too full. 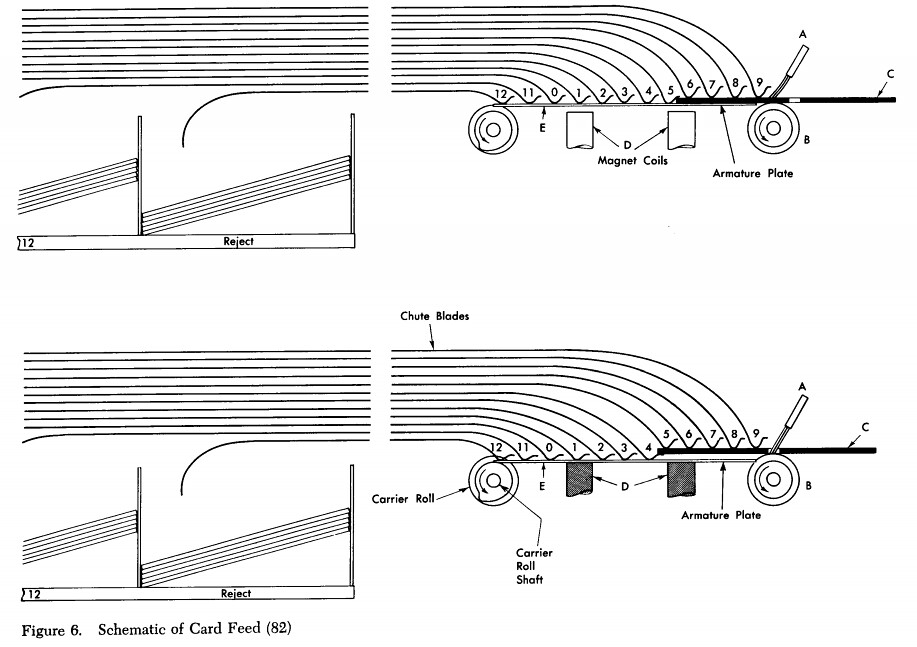 You can read more about the various sorting and selection algorithms in "IBM 82, 83 and 84 Sorters", from bitsavers.org. The default radix sort is O(N) -- that means that it is linear in the amount of data to be sorted, instead of O(N log N) like Quicksort or merge sort, both of which grow much faster than linear time. 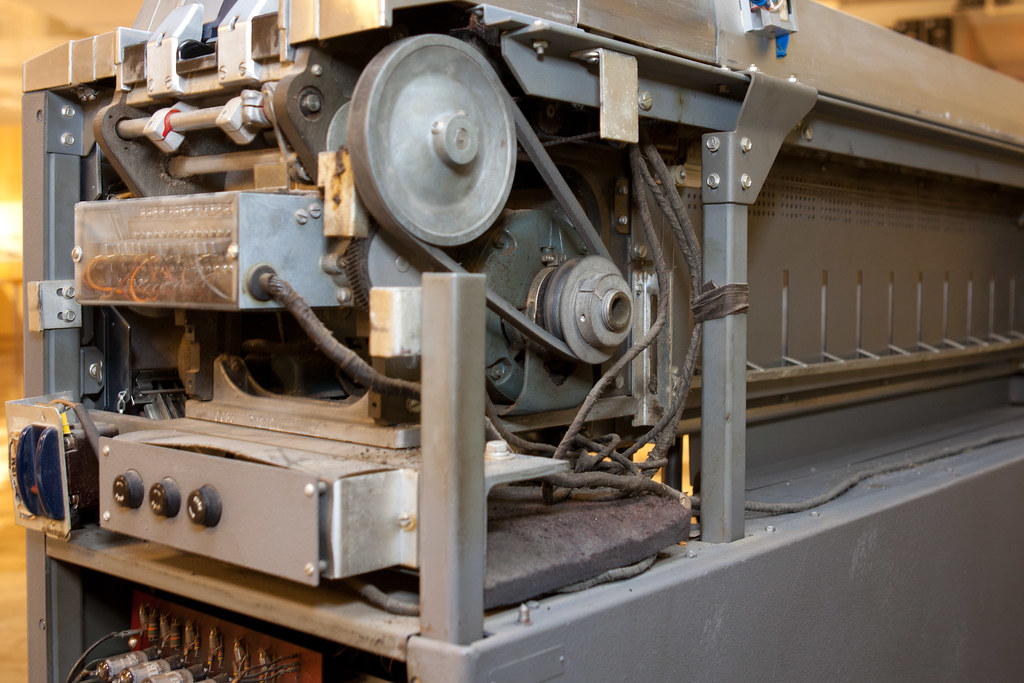 With the side panels removed the large ¾ HP AC drive motor is revealed, something also lacking in modern laptops. It spins the card feed mechanism and the output rollers that deliver cards to the hoppers. 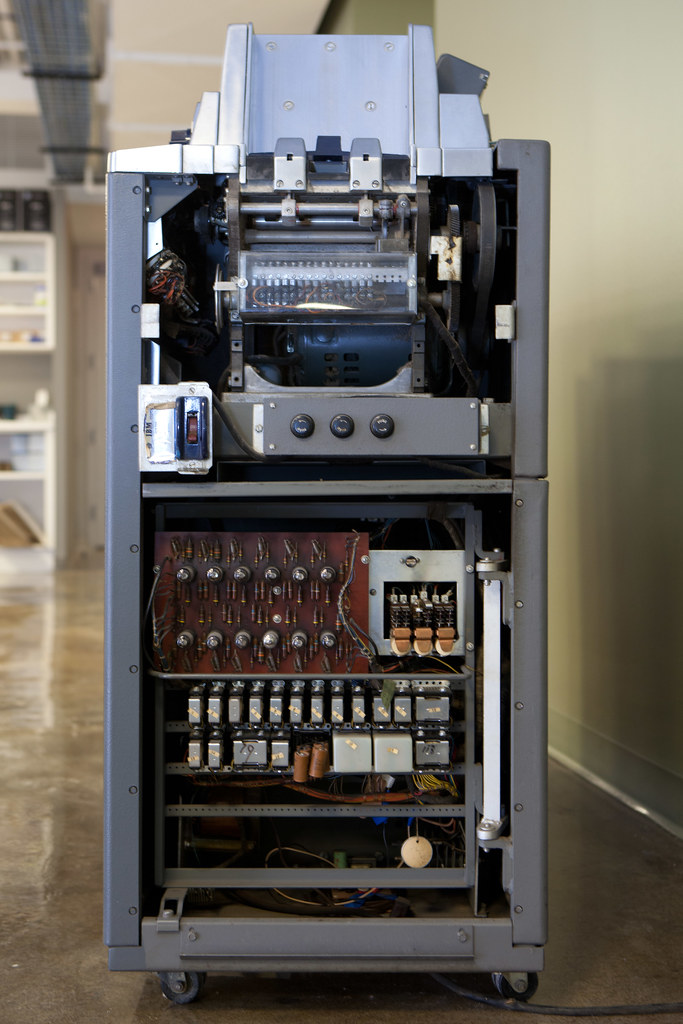 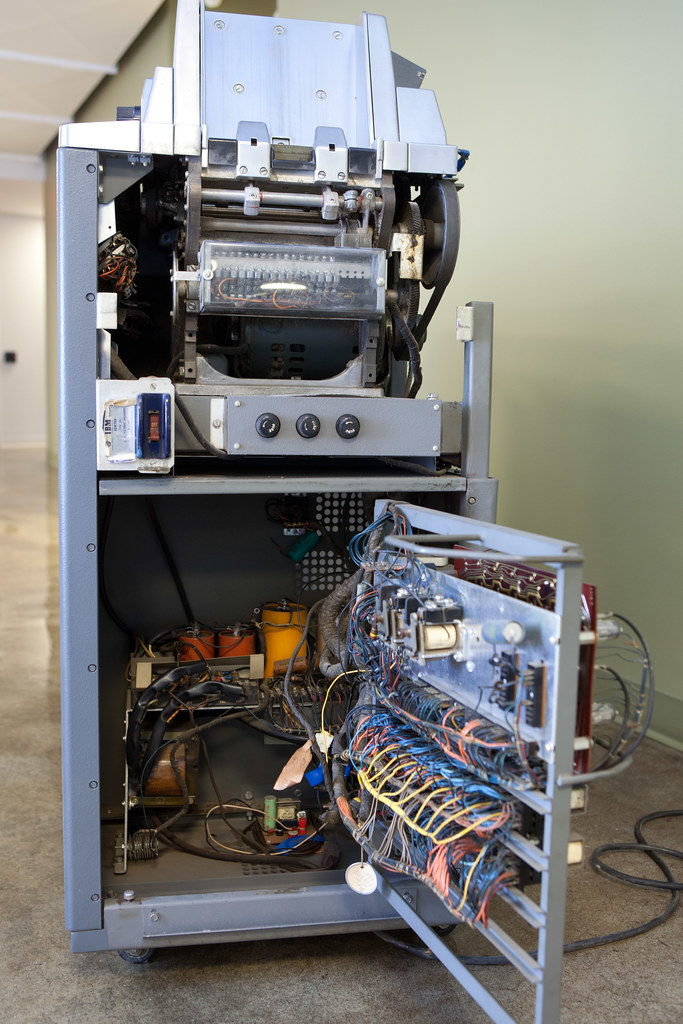 The logic board swings out to reveal the power supply rack. 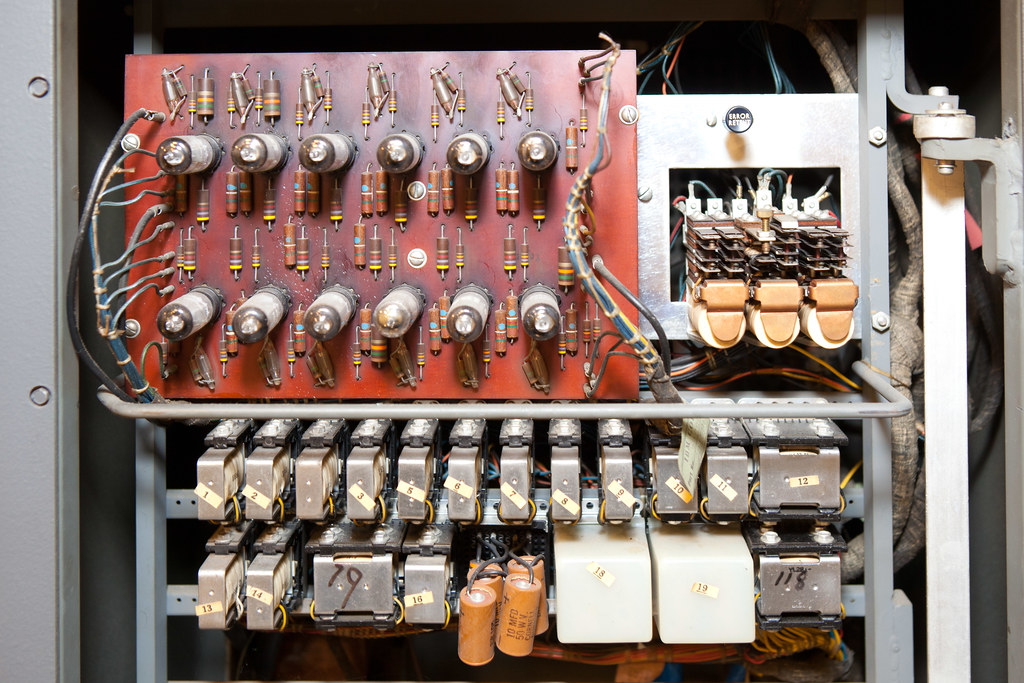 And what an amazing logic board it is! There are twelve bits per column on the card, each of which is handled by a separate vacuum tube. In addition to each vacuum tube, there is a small neon tube. 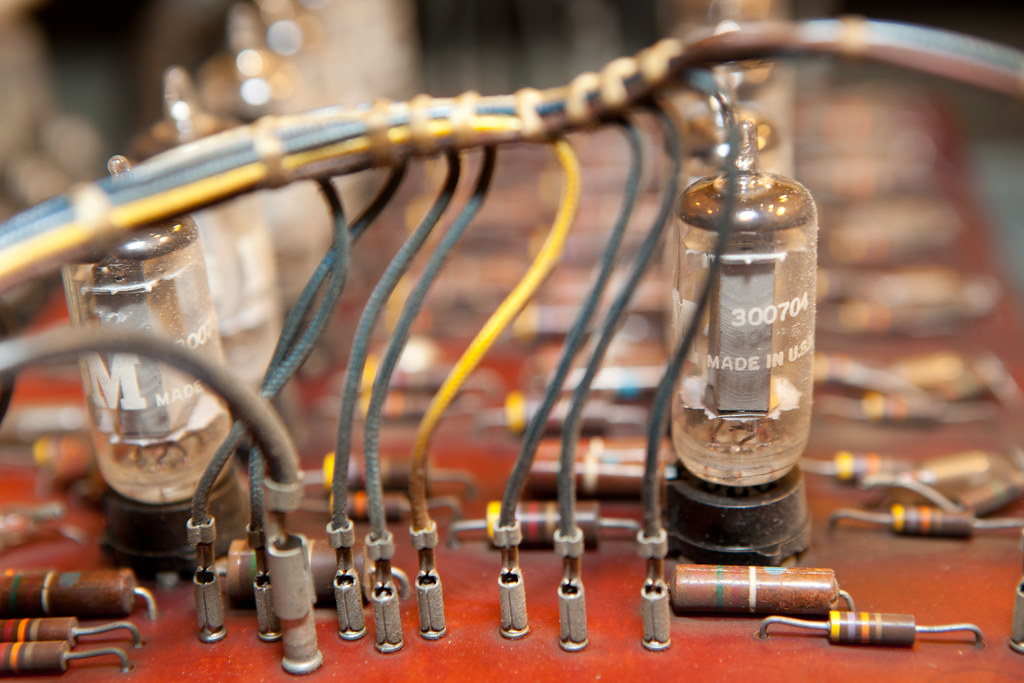 We don't have a service manual (and nor does the invaluable bitsavers.org in their IBM/punchedCard/Sorter section), so it will require some reverse engineering from the circuit board. At a first glance, all twelve appear to be identical. 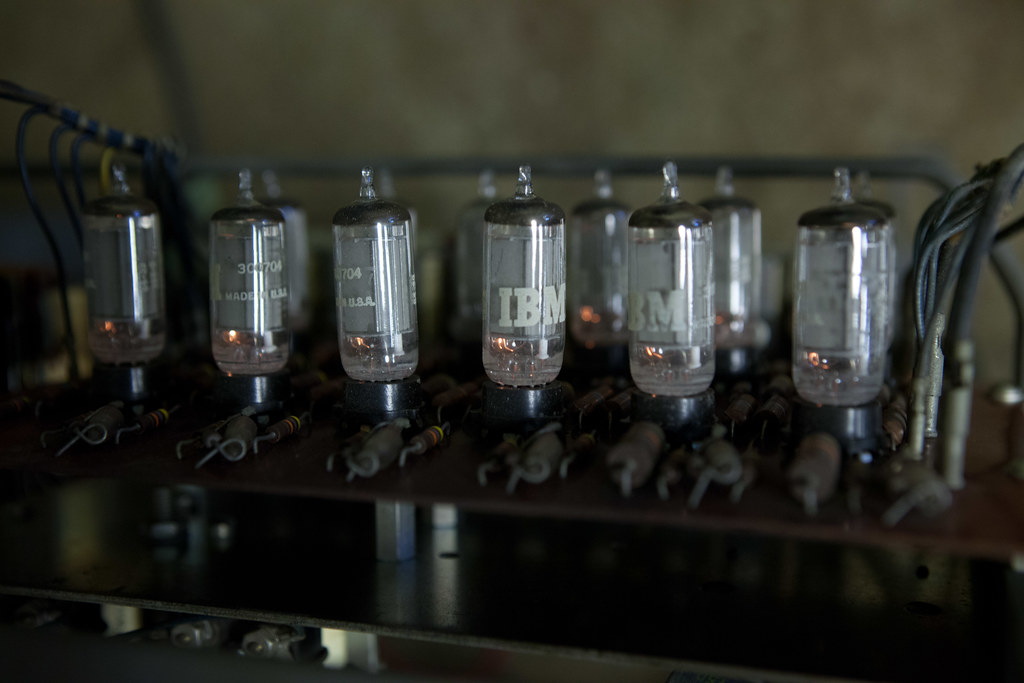 After powering on the sorter, the tubes require a minute to warm up. They emit a beautiful glow when running which also helps with diagnostics: one of the twelve was not functional, but when swapped with a spare that was loose in the bottom of the machine, the new tube powered on. 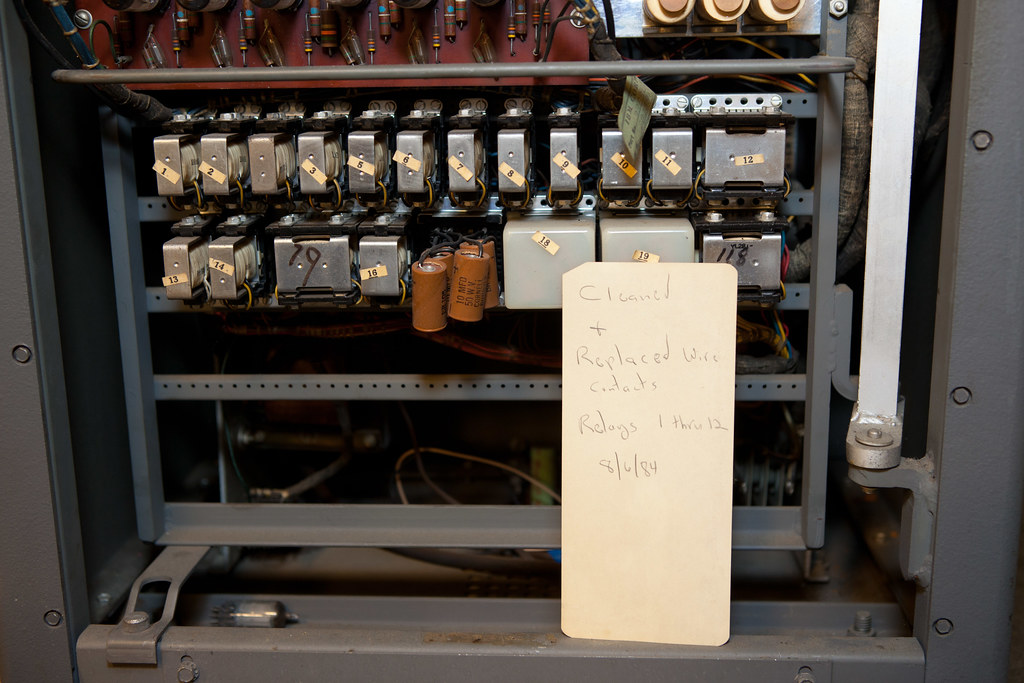 The last service entry in the log was from 1984 and there was also a punch card with a hand written note from the service tech who recorded that he had "Cleaned + Replaced wire contacts. Relays 1 thru 12. 8/6/84". Visible in the bottom left corner of the frame is one of the spare tubes. 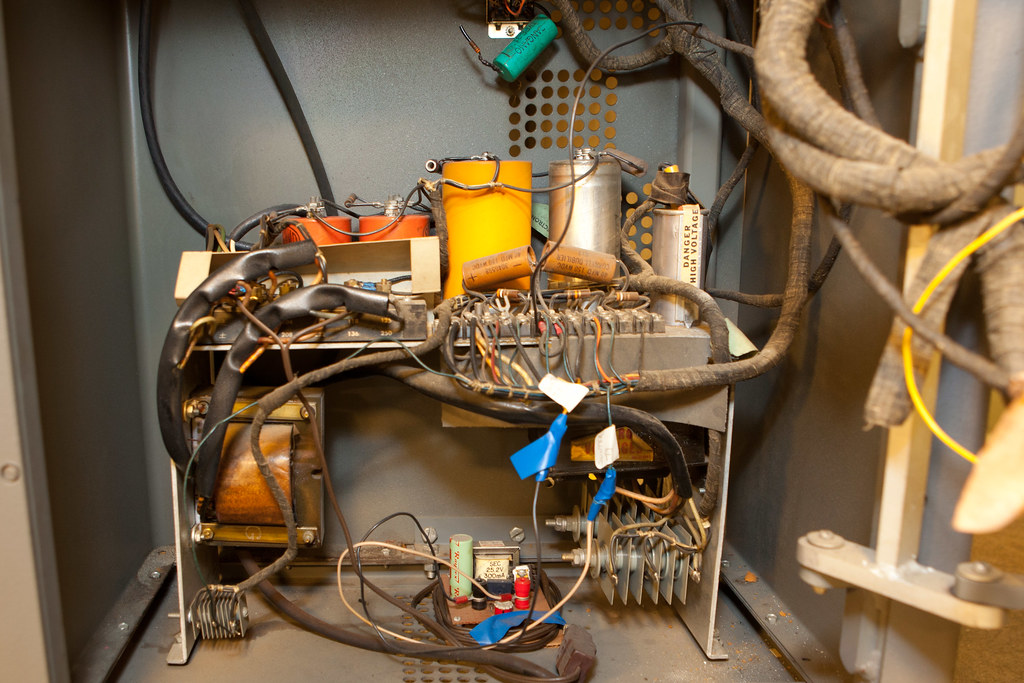 The power rack has some impressive capacitors, with large drain resistors. Thanks, IBM for thinking of our safety! The bus bar on the left has notation for perhaps the different voltages required, 118, 136, 250, 175, etc. 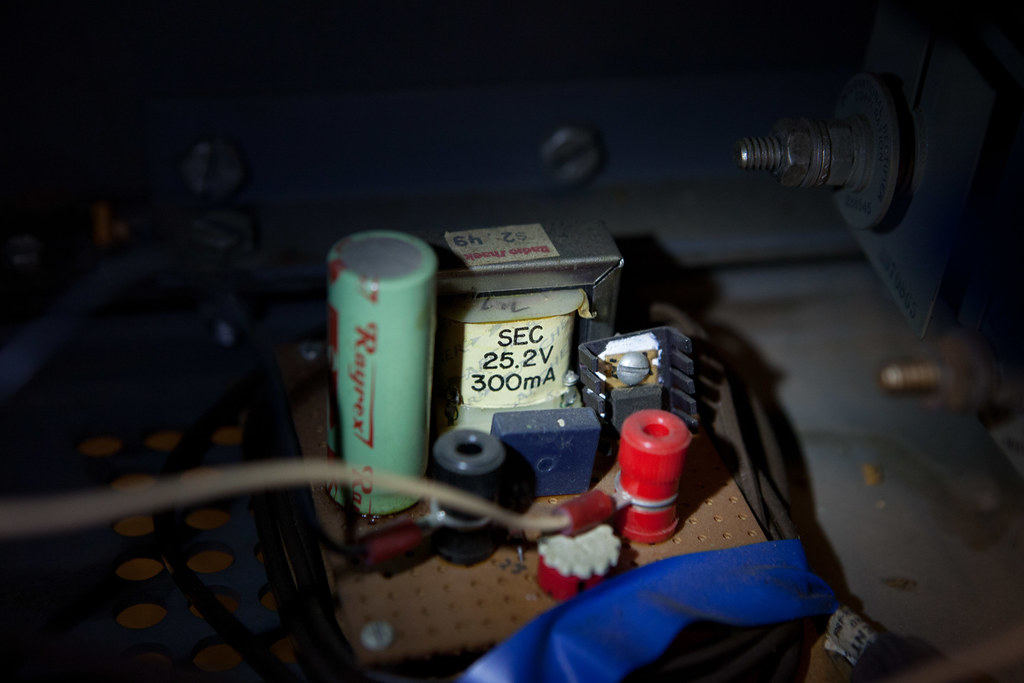 In the bottom of the frame is a bizarre non-standard piece of equipment. It appears to be a hand soldered perf-board with Radio Shack parts that is connected to the AC voltage through a cheap extension cord and then connects to the wiring harness with stickers that read "T7 Counter" and "T9 Counter". This likely drives the additional counter mentioned above, although we haven't figured out under what conditions it advances. 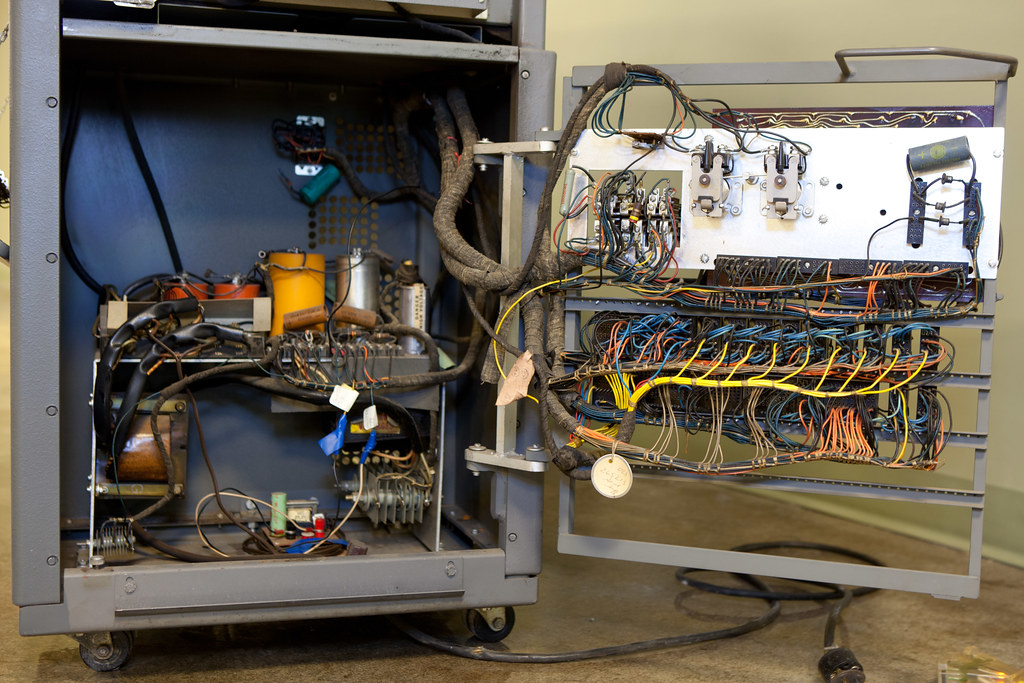 The bad news is that it doesn't actually work right now. With everything turned off, rotating the motor by hand (the 82 had a hand crank, something the 83 lacks) causes the card feed knife to select the card, route it through the reader and then dump it into the reject bin. When the main switch is turned on it feels like the motor casing is electrically hot and there is the sound of a stalled motor. As mentioned above, one of the tubes had to be replaced and the non-standard addition makes it hard to know if the large green capacitor should be connected to the patch connector above the power supplies (visible in the above photo), or if the disconnected lug (seen in the very top photograph) should be connected to the bus bar.

Here are a few more photographs of the internals of the machine. We are somewhat at a standstill until we trace some of the wiring harness further and figure out what has been changed with the additional counter. If you have a service manual for the IBM Model 83 Card Sorter or if you serviced them in the past, we'd love to hear from you.