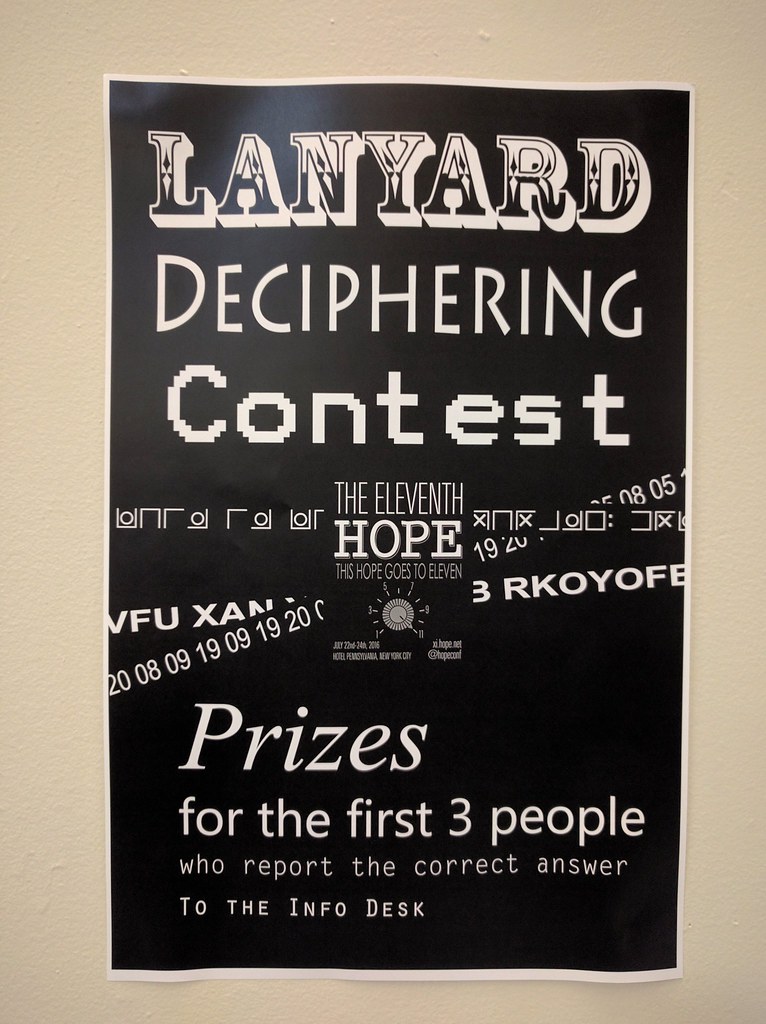 Like many hacker conventions, HOPE XI had a puzzle on the badges. I like puzzles, so I took of my badge during the first talk to see if I could get started on the challenge. There are spoilers on the page, so close the tab now if you want to solve it on your own! 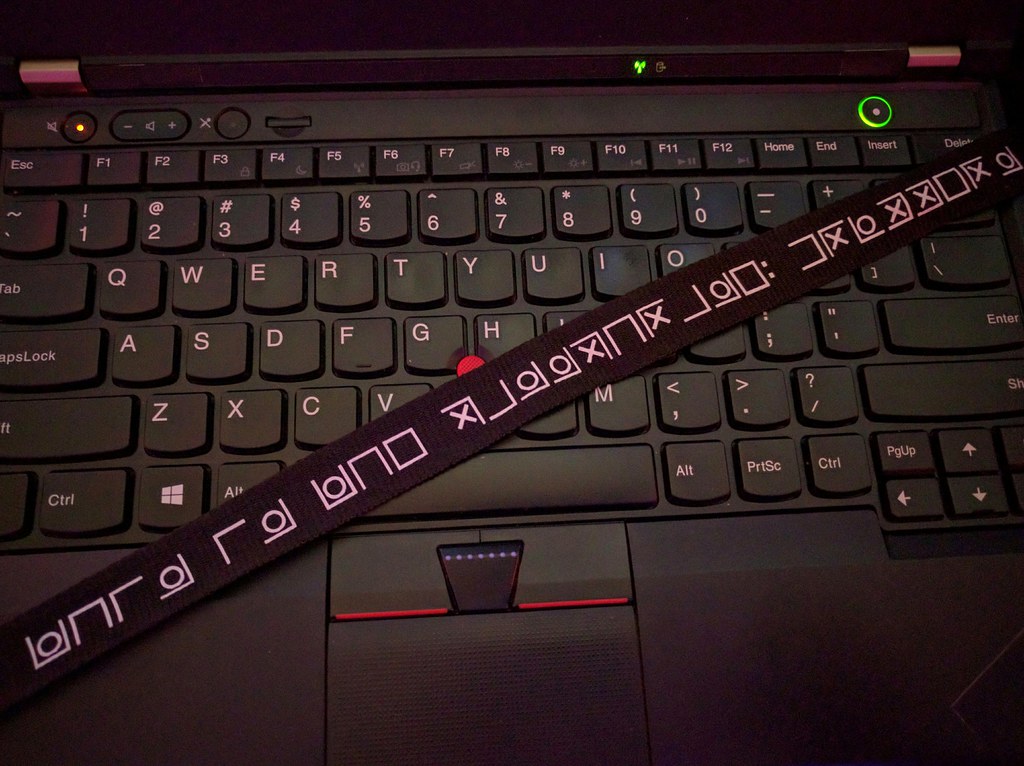 Rough frequency analysis looks like a normal English distribution and word lengths, so I assigned each symbol to a letter, which results in: ABCD CD ABE FGDDFBHGDE: IHJKKEHD

I guessed at the orientation since the ":" looked like a colon instead of a different symbol. The first observation is that "CD" shows up with the first two words and "AB" shows up in word one and three, which made me think that it is likely "THIS IS THE". Running the code through a solver like quipquip.com produces several possible results that confirmed my guess:

The first one seems the most likely. I almost ran down to the info desk with the passphrase, but noticed that some of the other badges had different markings. 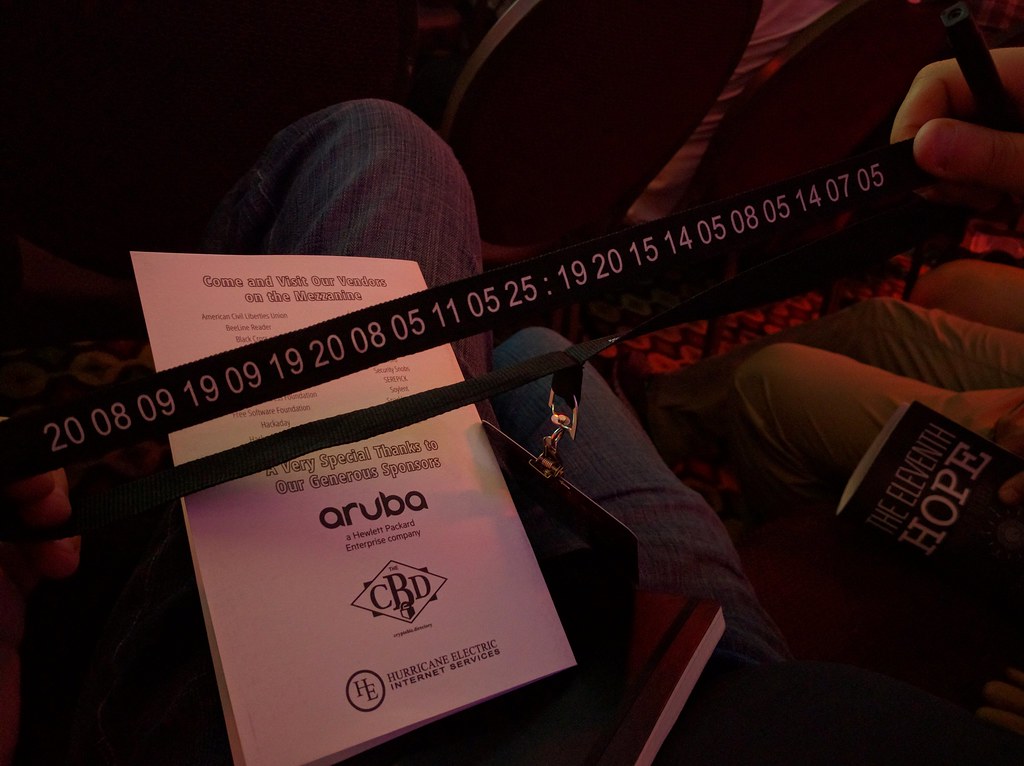 There might be spaces, but I had trouble telling, and there is definitely a color. Again the distribution looks roughly englishish, so I wrote a quick program:

Noting that this has the same starting pattern as the first badge, I guessed that the leading words are the same pattern "this is the". Splitting it that way and putting UIJT JT UIF LFZ: TUPOFIFOHF into produces some possibilities:

The one that looks most promising is that the key is STONEHENGE. Interesting that we have two clues, one with a passphrase and one with a key. 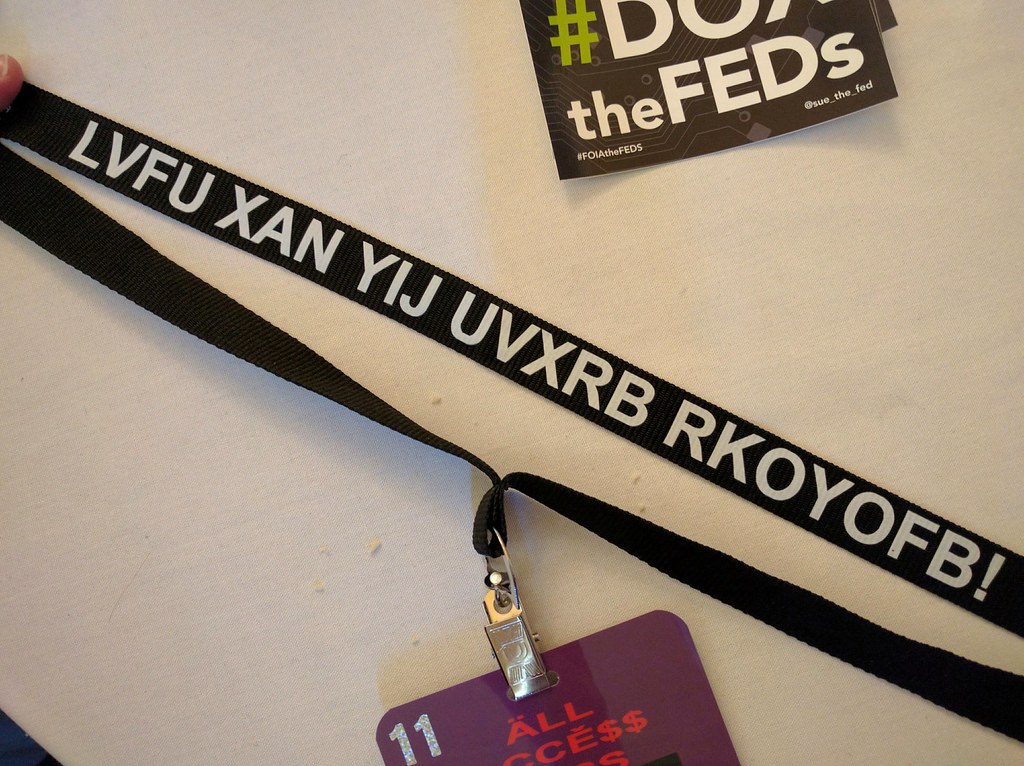 The third badge lanyard is just letters, but they don't seem to have a normal distrbution. Putting it into quipquip doesn't make sense -- possible solutions are "whet old far thous unifies!" and "fund may the dumps protons!", which are intriguing but odd.

There is a variant of the Vigenere cipher that uses a separate alphabet key in addition to the passphrase. Since the other two clues were a key and a passphrase, it makes sense to try that. Tyler Akins Keyed Vigenere cipher tool can decrypt a message based on the key, passphrase and enciphered message. The result is:

hope and you shall receive!

I ran to the info desk at 11am, only an hour after the conference started, and found out that many other people had already submitted their correct solutions. Perhaps there is a nice middle ground between a one hour challenge that can be solved with some automated tools and the the DefCon 23 badge challenge that required a team of experts, specialized hardware and the entire week.